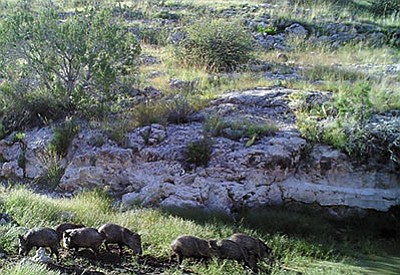 Javelina feed in Unit 18A. The general rifle season for the “Gray Ghosts of the Desert” ended last weekend. (DON MARTIN/For the Miner)

KINGMAN - The handgun, archery, and muzzleloader hunt for javelina along with the general rifle hunts in Units 10 and 18A, 16A and 18B have come to a close, and for many hunters, it was a good year to be pursuing the Gray Ghosts of the Desert.

On the opening weekend of the two-weekend HAM hunt, Jay Chan and his brother Alan connected on a pair of porkers in Unit 18B. Alan got his on opening day while Jay got his on the morning of Day 2.

So did some friends from the Phoenix area who always come up and hunt in Unit 18B. They found a huge herd in Unit 18B and got three of them on opening day and, amazingly, all used the same muzzleloader.

Dan Driggs and Bryan Beckstead came in from St. George, Utah, and I went out with them on the second day of the hunt. Dan glassed up a small herd of pigs; they bagged a pair of big ones.

That left only Gary Martin in camp with an unfilled tag.

Saturday evening, Jay glassed up a large herd of pigs and though there wasn't enough time for Martin to go after them, we all watched while they bedded in some rocks near the top of a nearby mesa.

The next morning we were all out there, but never saw the pigs.

On Wednesday, Gary went back up and found the herd again. In short order he connected with a young boar.

That left a couple of friends of ours, Jack Gunnoe and Joe Herrero, with unfilled tags.

Both filled them out on the last Saturday of the two-weekend hunt, with both Herrero and Gunnoe taking big pigs.

Other locals who filled tags on the HAM hunt included Greg Holden and his son, Devin. Both took pigs with handguns in Unit 18B.

Holden also assisted Mike Taflan, who bagged a pig with a scoped handgun.

On the rifle hunt, successful hunters included Jay Chan, who filled his second tag of the year. Michael Chan came all the way from Minnesota to hunt with his father, Jay, brother Ryan and Uncle Alan on the general hunt.

Michael bagged his pig on the first day out.

A couple of hunters from St. George found success on javelina on opening day. Colby Adams had made his third trip to Mohave County while Roy Echols was on his first javelina hunt here.

The talk of many hunters in Unit 18B was that they felt there were a lot of crowding issues on the general rifle hunt this year, when 450 tags were issued.

Gary Martin, who has hunted pigs in Unit 18B for many years, said that he feels the javelina herds are being over-hunted and that there are too many hunters in the field.

"You figure that those pigs have to deal with hundreds of archers in January (there are 1,500 permits for a block of six units, including Unit 18B) then a 100-permit hunt by the kids, followed by a 250-permit HAM hunt and then 450 general rifle tags," Martin said. "That's just too many tags and by the time the general rifle season opens, the remaining pigs are very, very spooky!"

Next phase of javelina season opens on Friday
Am I crying ‘wolf’ about the pig numbers in Unit 18B?
Javelina hunts produce strange results this year
HAM javelina hunts start on Friday
Good year for hunting in Mohave County