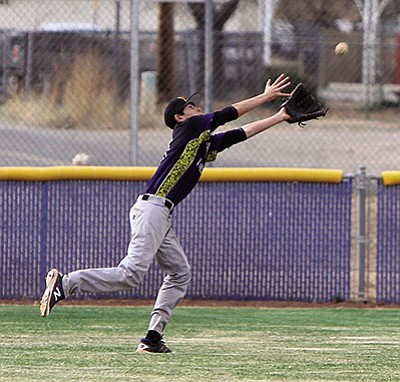 Kingman’s Luke Ness chases down a flyball during Thursday’s game against Chinle in the KHS Baseball Invitational Tournament.

Carter Rhoades delivers during his 2-0 win over Chino Valley Thursday.

KINGMAN - The Kingman Bulldogs reached the semifinals of the KHS Invitational Baseball Tournament with a never-say-die attitude and Lee Williams got there on the strength of its pitching and defense after the first two days of play Thursday and Friday at KHS.

Kingman (2-1) opened the tournament Thursday with 8-7 win over River Valley when Derek Brown hit a walk-off single through a drawn in infield. The Bulldogs bats then went quiet in a 4-1 loss to Chinle, which earned Kingman the No. 6 seed for the championship bracket.

The Bulldogs faced No. 3 Gila Ridge (1-2) in the first round Friday. The Hawks scratched two runs off of freshman Rilee Araya through five innings. With the time limit ending the game with Kingman's last at bats, Mason Telford took his turn with a walk-off single to put the Bulldogs into the semifinals.

"I ran one of my best pitchers out there and he filled up the pot," said KHS baseball coach Chad Baitinger. "We had baserunners on every inning, and we finally got clutch hitting today. I'm very proud of Mason."

Kingman played Lake Havasu (2-1) Saturday. Results from Day 3 were not available by deadline.

Lee Williams (2-1) earned the No. 4 seed after pool play. After falling to Lake Havasu, 4-2, Lee beat Chino Valley 2-0 as left Carter Rhoades went the distance for the Vols to win the pitcher's duel.

Lee advanced to the semifinals by eliminating Kingman Academy (2-2) in the first round, 11-4. The Tigers scored four first-inning runs, but quickly gave it away when Lee scored nine in the bottom half. Kenyon Rowley and Rhoades each had two hits for the Vols, and Rowley had three runs batted in.

"Our pitchers are throwing very well, and our defense has been playing lights out," said LWHS baseball coach James Mayfield. "That is only two components and the third his hitting. Our bats seemed to awaken today."

The Vols had a rematch with Chino Valley in the other semifinal Saturday. The winners of each semifinal played for the championship Saturday as well.

The Academy opened the tournament by jumping out in front of Mohave but couldn't hang on as the T-birds came back for a 6-5 win. Andrew Quick hit a two-run home run for the Tigers. Academy then bounced back with a 7-4 win over Gila Ridge. Levi Garcia knocked three base hits and Donnie Tatham drove in four runs.

After falling to Lee Williams Saturday, the Academy eliminated River Valley (0-4) from the consolation tournament, 6-3. Thomas Easter's two-run scoring double in the fifth inning was key for the Tigers.

Academy played in the Consolation Championship against either Gila Ridge, Mohave or Chinle Saturday.