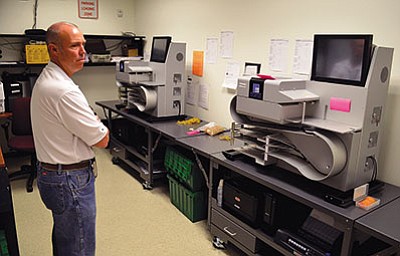 "There were plenty of places to vote. I didn't get any complaints. There were some lines but nothing like Phoenix," said Mohave County Elections Director Allen Tempert.

This is the first year the central count system - where ballots are placed in locked boxes, brought to a central location and counted in a scanner-replaced the older precinct optical scanning unit system that scanned and counted ballots at the polling sites. The older machines had outlived and outworked their 10-year lifespan and were overdue for replacement. Tempert wanted to procure more efficient scanners and found a way to streamline the voting process.

"This was a huge undertaking we went through Tuesday. We've progressed well. We surpassed expectations," Tempert said.

Republican, Democrat and Green Party presidential candidates were the only choices on the ballot this month. Some Arizona independent voters not registered with those parties may have felt disenfranchised.

Parting ways with members of his own party, Gov. Doug Ducey said Wednesday he wants to keep the state's presidential primary and open it up to currently disenfranchised political independents.

Arizona law limits the preference election strictly to those registered with parties that have candidates on a ballot. All voters regardless of party affiliation will be allowed to vote in November's presidential election.

Ducey feels that a large number of independents sought to vote but weren't able to due to the existing law.

"That's just wrong,' he said. "If people want to take the time to vote they should be able to, and their vote should be counted.'

Those include people who showed up and insisted on voting despite the fact their names could not be found on the voter rolls of any of the parties holding primaries. More to the point, those votes will not count unless they can show they were, in fact, registered with a party.

Gubernatorial press aide Daniel Scarpinato said his boss opposes the legislation. He said the governor not only wants to keep the state-run presidential primary but open it up to everyone.

"The governor's view is that people who take the time to vote who are registered voters, that their votes should be counted,' he said. "The fact that more people want to participate is a good thing.'

"This is a presidential preference election. You have to be a member of that organization (party)," Tempert said. "Voters had 29 days before Election Day to register as well as voting by early ballot."

State Rep. Sonny Borrelli (R-Lake Havasu City) also mentioned that this last election was not between a Democrat and Republican - but to select a presidential candidate from each party.

"If you can't figure out which side you're on, it's too late. It's not like these elections started yesterday," he said, referencing the amount of time voters have had to prepare and research. "You should be analyzing (the candidates) all year round."

There are currently 45,826 independents - to include Libertarians and other parties - in the county and provisional ballots (those dropped by voters without documented affiliation) were still being counted at deadline.

Mohave County Democratic Central Committee Chairman Joe Longoria felt that allowing voters without an affiliation - to any party - could skewer this type of election.

"There's too much of a chance that an independent can sway votes away from another party. If they want to make that choice then they need to choose a party," he said.