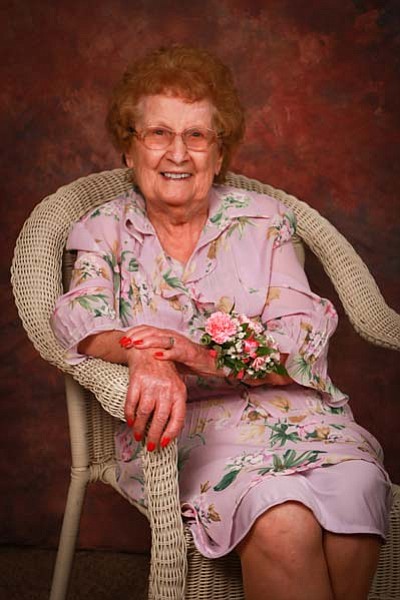 Louise Wicke Davis, 101, longtime resident of Kingman and Ehrenberg, Ariz., passed away peacefully on March 17, 2016 surrounded by the love of her family in Big Bear, Calif.

Louise was a longtime parishioner of St. Mary's Catholic Church in Kingman and St. Joan of Arc Catholic Church in Blythe, Calif. before joining St. Joseph's Catholic Church in Big Bear. Louise enjoyed the many organizations she was involved in and continued her participation until the last year when her health wouldn't allow, such as Altar Society, Daughters of the Pioneers, Business & Professional Women, to name a few. She also relished the many hours spent in service writing the church newsletters, working in the high school attendance office, the church bazaars and assisting with the CCD programs.

She was preceded in death by husbands Roy Wicke who passed in 1950 and Charles "Val" Davis who passed in 2002. She is survived by her children, Evelyn Taylor of Colleyville, Texas; Gary and Carrie Wicke of Placentia, Calif.; Sharon and Rick MacKenzie of Big Bear, Calif.; and Cheryl and Corry Utz of Buckeye, Ariz. She was blessed with 11 grandchildren and 18 great grandchildren.

She always had a ready smile and was the life of the party. She treasured her friends and family who will miss her bright light terribly.

Services will be held in Kingman on Saturday, April 2, 2016 with memorial at 9 a.m. at Sutton Funeral Home, 1701 Sycamore Ave. followed by the funeral at 11 a.m. at St. Mary's Catholic Church, 302 E. Spring St. Graveside and a celebration of life reception will follow.

In lieu of flowers, the family is requesting donations be made in her memory to your local breast cancer charity.