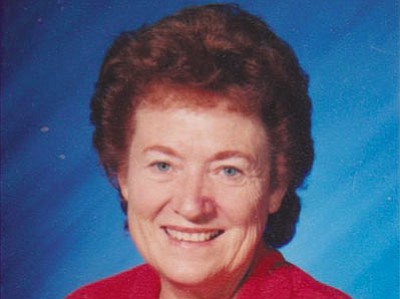 Virginia Lee (Virgie) Boyett passed away on March 24, 2016, at the age of 80 following a courageous battle with Alzheimer's. She was the last of four children of Virgil and Ora Whitwell.

Born in 1935 in Kingman, she spent the early years of her life on a small farm on the Big Sandy River near Trout Creek. Her family relocated several times during her childhood, but moved back to Kingman in 1949.

In 1950, she married Jim Boyett and they began their new life together in Kingman, where they have resided throughout their 66-year marriage. Virgie and Jim raised five children: Jim C (Kathi) Boyett, Debbie Sedich, Brenda Fass, Dovee Boyett and Jeffrey (Julie) Boyett.

Virgie worked for 28 years as a kindergarten classroom assistant at Manzanita and Hualapai elementary schools in Kingman, retiring in 2000. She also taught the children's Sabbath School classes at the SDA church for a total of 55 years.

Virgie was preceded in death by her parents, two brothers and one sister. She is survived by her husband, Jim Boyett, her five children, 14 grandchildren and 22 great grandchildren, as well as many nieces, nephews and special extended family members.

She will be fondly remembered for her caring, loving, kind and sweet spirit and the special thoughtfulness she extended to all of the children and teachers who were so positively influenced during their experiences with her. She had a God-given talent for helping children feel loved, important and capable, and her faith in God was shared each day as she remained cheerful and helpful to everyone she encountered.

A memorial service will be held at the Kingman Seventh-day Adventist Church at 3 p.m. Sunday, April 3, followed by a time of refreshments and fellowship. At her request, she will be cremated and a private family burial will be held at a later date.