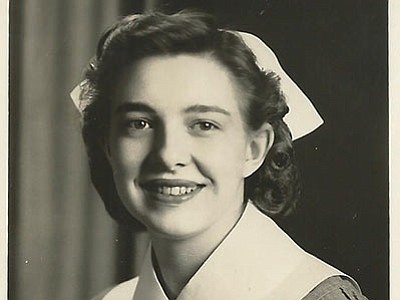 She is survived by her children, Margaret Mabry (Mike) of Burleson, Texas, and David Hammer (Karen) of Glendale, as well as grandchildren Leora Joiner (James), Jason Hammer, Michala Mabry (Caroline) and Timothy Mabry (Erin), and two great-grandchildren, Mikey Joiner and Everett Mabry. She was preceded in death by her parents, a sister, two brothers and her daughter Ruth.

Leora was born in Carlyle, Ill., attended Greenville High School and graduated at 16 to attend the Evangelical Deaconess Nursing School, where she graduated with honors.

Leora was a long-time member of the Kingman community and was active in Soroptimists, Easter Seals Society and the Republican Women's Club, and was a founding member and long-time parishioner of Grace Lutheran Church and Living Word Lutheran Church. She took great pride and lived for over 50 years in the William G. Blakely house, one of the oldest homes in Kingman.

The family requests condolences be made to the Kingman Food Bank for blankets for the homeless, one of the many charitable organizations she supported.