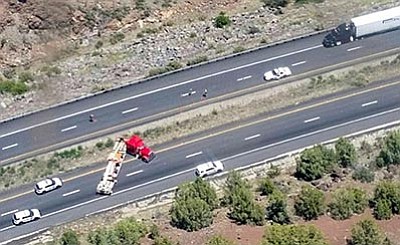 A tractor-trailer rig blocks Interstate 40 lanes Sunday afternoon, May 15, after its driver took DPS troopers on a 100-mile chase from the Kingman area to near Ash Fork. (DPS/Photo courtesy of YCSO)

Raul De La Rosa Giron, 36, of Texas, was booked into the Coconino County jail on felony charges, including three counts of aggravated assault on a police officer, felony flight and resisting arrest, along with misdemeanor DUI-drugs. His first court appearance was at 10 a.m. today.

The red tractor-trailer reached speeds of 90 mph in an incident that began at 8:30 a.m. when a number of callers reported the operator of a semi was driving recklessly on Interstate 40 near the California line. They then called to say Giron crossed into California and exited the interstate and re-entered heading east, according to the Department of Public Safety.

DPS said Highway Patrol troopers and other law enforcement officers pursued Giron from Kingman. At times the driver reached 90 mph and used the shoulders to pass other motorists, forcing the interstate's closure in both directions.

"For close to 100 miles troopers and deputies from Yavapai and Mohave counties tried to stop the commercial vehicle with stop sticks (a tire deflation device)," said DPS in a statement. "Finally, near Ash Fork, the vehicle was successfully spiked and stopped."

Giron abandoned the truck and ran. Troopers and a Highway Patrol canine unit were in pursuit when the man reportedly stopped and "engaged troopers with an item he simulated as a weapon," according to DPS. The item was a cell phone. One trooper fired roughly four rounds, but missed each time. The K9 was used to take down the driver.

Giron was taken to a Flagstaff hospital for non-life-threatening injures due to a K9 bite.