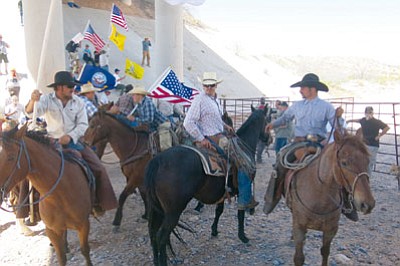 Supporters of rancher Cliven Bundy gather under an I-15 bridge where the Bureau of Land Management had installed a temporary fence as a barrier. (BILL GOODE/Courtesy)

LAS VEGAS (AP) - Federal prosecutors in Las Vegas fear that backers of Nevada rancher Cliven Bundy would use names and information disclosed in evidence to target court officials and intimidate witnesses in the criminal case stemming from a 2014 armed standoff near Bundy's ranch, according to court filings.

U.S. Attorney Daniel Bogden and prosecutors say in the filings that they've received several threats, including a recent Facebook post that named a government attorney with a message that "it would be a joy ... to read about the lone wolf attack that put this rabid dog down for a dirt nap."

Prosecutors are asking the court to order defense lawyers to keep confidential evidence that the government shares with them.

The Associated Press, the Las Vegas Review-Journal and rural Nevada newspaper publisher Battle Born Media are seeking to challenge the effort as an infringement on First Amendment free speech and press rights.

"The government is walking a fine line to try to carve out an exception to the First Amendment," said Margaret McLetchie, an attorney fighting for the media. She termed the government a gag order.

To make her case, she first has to get the judge to let the media challenge it.

Prosecutors argue the news outlets are a third party with no legal standing in the criminal case.

Bogden and prosecutors have declined comment. They say the court filings speak for themselves.

Bundy and 18 other defendants have pleaded not guilty to conspiracy, obstruction, weapon, threat and assault charges in the tense gunpoint standoff in April 2014 against government agents and cowboy contractors.

All 19 are in custody, with trial scheduled next February. Each faces the equivalent of life in prison.

Most have also filed documents opposing the proposed gag order.

"There's a certain irony to this case," McLetchie said Monday, noting that many charges hinge on whether the defendants threatened and assaulted government agents. She said the public has to be able to assess the evidence.

"It's especially important, in a case where the government is prosecuting people who are its critics, that the public be able to assess what really crosses the line from criticism to illegal threats," McLetchie said.

Bundy maintains that states are sovereign and the federal government has no authority over public land where he grazes cows. He summoned supporters to his side after the federal Bureau of Land Management obtained court orders authorizing the round-up of cattle from the scenic Gold Butte area near his ranch outside Bunkerville, about 80 miles northeast of Las Vegas.

The agency said that over 20 years, Bundy racked up more than $1 million in unpaid grazing fees and fines.

No shots were fired, and no one was injured in the confrontation before the government abandoned the round-up.

Prosecutors have circulated among defense attorneys a proposed order to keep records confidential, and U.S. Magistrate Judge Peggy Leen issued a temporary order sealing the information until she decides whether to hear McLetchie's argument against making the order permanent.