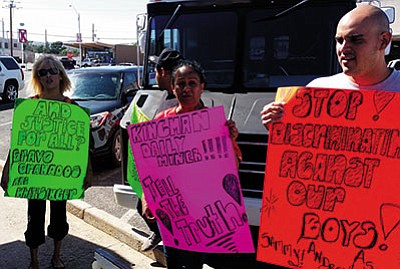 Relatives and friends of Samuel Bravo, Andrew Granados, both 16, and 18-year-old Ashlin Whitesinger protest their prosecution on attempted murder and other charges Monday. The mother and stepfather of one of the boys believe police and the Daily Miner have over-reacted to a home invasion and robbery the three allegedly committed.

KINGMAN - Melanie Nunez knows her teenage son probably committed several bad acts on a cold January night when he and two others allegedly invaded the home of a Kingman woman, but she's convinced Samuel Bravo did not commit the most serious count he faces - attempted first-degree murder.

Nunez's niece, Veronica Bravo, was convicted of attempted first-degree murder in 2006 and sentenced to 21 years in prison. She was 16 years old when the crime occurred.

Her codefendant, Ray Carlton, was 23 when they stabbed and shot to death 19-year-old Christina Buus in July of 2005. Carlton, who was largely convicted on Bravo's testimony, received a sentence of natural life.

Judge Lee Jantzen, who is presiding over the cases involving Samuel Bravo and his codefendants, was the prosecutor in 2006.

"He is a Bravo," said Nunez. "We were one of the first minority families in Kingman and we had to stand up for ourselves. I have a big mouth."

The family's infamy was sealed with Veronica Bravo's horrible crime 11 years ago. And while Veronica Bravo was given a plea deal to attempted first-degree murder, she actually has a lot of potential in his life."

"He mastered chess in about a year," said Anthony Nunez, who has been Bravo's stepfather since Bravo was in kindergarten.

The Nunez family also has compassion and deep remorse for Bravo's alleged victims - he faces additional charges in a similar crime that purportedly took place prior to the Jan. 27 incident.

Still, they have been targeted on social media websites. Death threats have been made. Racist comments regarding Native Americans have been posted and other invective has been hurled.

Melanie Nunez points out she is the one who called police Jan. 30. She was terrified that police were gunning for her son. When police arrived at the Miami Avenue home Nunez has lived in since she was a toddler, she had Samuel Bravo lay down on the living room floor. She reminded him to make sure police could clearly see his hands.

"I did this to save his life," she said.

Nunez has visited him at the Mohave County jail as often as she can. She was given $500 in reward money that Silent Witness offered and took that money to buy food for her children - she has nine, with several still at home, including twin daughters who just graduated with honors from Kingman Middle School.

Anthony Nunez is more realistic than is his wife. Melanie Nunez can't accept the fact that if convicted, her son will likely go to prison.

"And we do feel for the victim," said Melanie Nunez. "What happened to her was a nightmare, but I don't want my son to pay more than what he needs to pay.

"We'll do everything we can to make sure he's treated justly."