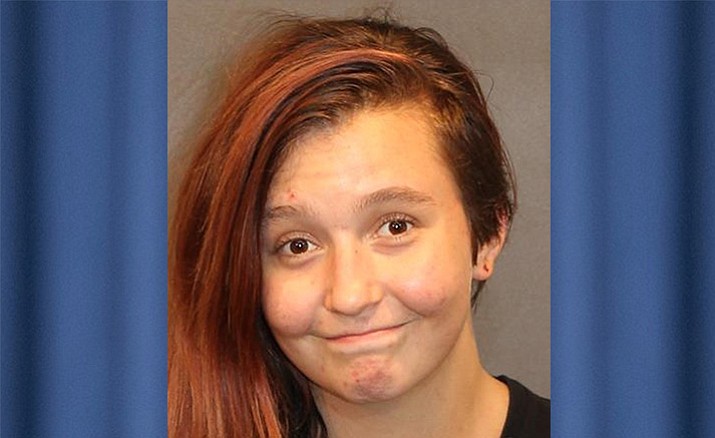 On Sept. 25, at about 9:15 p.m., Kingman Police arrested Emily Rose Webb, 34, of Kingman, on felony charges of possession of dangerous drugs, possession of marijuana, possession of drug paraphernalia and a misdemeanor warrant for failure to pay fines.

She was also found to be in possession of a syringe filled with methamphetamine, a marijuana plant and assorted drug paraphernalia. Webb was booked into the Mohave County Adult Detention Facility.

Approximately 8:40 a.m., deputies responded to a residence in the 2400 block of Lass Avenue regarding a wanted person with warrants. Upon arrival, deputies contacted Knighton and learned the wanted person was not at the residence. Deputies observed a water-based pipe in the window sill of the living room. Knighton advised the pipe did not belong to her. A consent search of Knighton’s purse revealed a syringe containing a brown substance and a glass pipe with residue and pieces of crystal.

Knighton was taken into custody without incident. She was transported and booked into the Mohave County Jail.

Approximately 10:40 p.m., deputies conducted a traffic stop on Northern Avenue at North Lomita Street. Deputies contacted Connell, the driver, and smelled an odor of alcohol on him. During conversations with Connell, he admitted to having four beers earlier. A records check revealed Connell to have a revoked driver’s license since 2009. Following the field sobriety tests, Connell was taken into custody and transported to the Mohave County Sheriff’s Office where an analysis revealed his blood alcohol concentration to be .121 percent.

He was transported and booked into the Mohave County Jail without incident. The vehicle was towed from the scene.

Approximately 8:20 p.m., deputies contacted Koch at a residence in the 3000 block of Devlin Avenue during an unrelated call.

A records check showed Koch to have outstanding warrants. Koch was taken into custody without incident. He was transported and booked into the Mohave County Jail.

Approximately 1:20 a.m., deputies contacted three men while they were walking in the 3100 block of Devlin Avenue. Deputies recognized one of the subjects to be Ingram and deputies knew him to have active warrants.

Ingram was taken into custody without incident. A records check confirmed Ingram’s warrants. A search of Ingram revealed a glass pipe and a piece of tin foil containing a white crystal substance which field-tested positive for methamphetamine. He was transported and booked into the Mohave County Jail.

At about 9:20 a.m., deputies observed a man walking in the area of Marshal Drive and Suffock Avenue. Deputies drove past the man and made a U-turn. As deputies turned their vehicle around, he disappeared from sight. A short time later, deputies observed the him running through an alley between Packard and Potter avenues. Deputies further observed the subject run through an empty lot and into a residence in the 3100 block of Packard Avenue. Deputies responded to the residence and got consent to search the house. Deputies located the man hiding in a bathroom closet. He was identified as Lenzi and was detained. Deputies located a plastic bag containing a white crystal substance where he was hiding in the closet. The crystal substance field-tested positive for methamphetamine. A records check showed Lenzi to have outstanding warrants.

He was transported and booked into the Mohave County Jail.