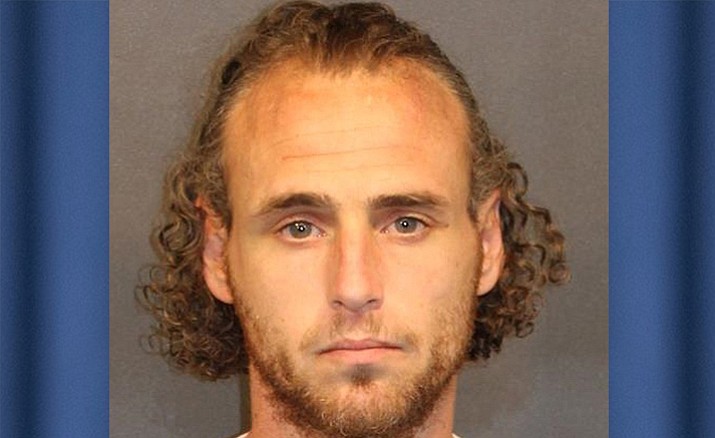 At about 11:30 p.m. Thursday evening, deputies responded to an assault report that occurred earlier in the evening around 9 p.m. in the area of Quail Lane and Mallard Drive. Upon arrival, deputies contacted a 29-year-old male victim. Deputies observed the victim had numerous lacerations to his head that included stitches and staples.

The victim said that he approached Holder at the corner and they started fighting. The victim reported that he was hit in the head about five times with something and further reported that when he fell to the ground, he grabbed Holder’s arms and saw he was holding a hatchet.

The victim further said that Holder left the area and he went to seek medical attention. Deputies observed the victim’s discharge paperwork and attempted to locate Holder without success. Deputies contacted a witnesses who confirmed the victim’s statements.

Approximately 11:20 a.m., Friday morning, deputies located Holder at a residence in the 3500 block of Warbler Lane where he was contacted. Holder advised that he had the hatchet in his waist band when he was attacked by the victim. Holder allegedly admitted to hitting the victim with the blunt end of the hatchet about five to six times. Deputies seized the hatchet.

Holder was taken into custody without incident. He was transported and booked into the Mohave County Jail.

Approximately 4:35 p.m., deputies responded to a welfare check in the 500 block of Teddy Roosevelt Road. The reporting party advised of a male subject slumped over the wheel of a dark colored truck. Upon arrival, deputies located the vehicle.

As deputies approached the vehicle, they reportedly smelled an odor of alcohol coming from the truck.

Deputies observed a male subject sitting in the driver’s seat with his head positioned downward. Deputies knocked on the vehicle and the male subject started looking forward and around. The male subject was identified as Reed.

Deputies reportedly observed a bottle of vodka near Reed. During conversations with Reed, he said that he hadn’t been drinking. A records check showed Reed to have a suspended driver’s license for a prior DUI.

Following the field sobriety tests, Reed was taken into custody and transported to the Mohave County Sheriff’s Office where he allegedly refused to submit to a breath analysis. A blood sample was taken from Reed to be submitted to the ADPS Crime Lab for further analysis.

He was transported and booked into the Mohave County Jail without incident. The vehicle was towed from the scene.

At about 9:40 p.m., deputies responded to the Sheriff’s Office in reference to a subject wanting to turn himself into authorities regarding his active warrants. Deputies contacted a male subject identified as Johnson.

Johnson was taken into custody, transported and booked into the Mohave County Jail without incident.

Approximately 4:30 p.m., deputies contacted Scott at a residence in the 4600 block of Melody Street during an unrelated incident. A records check showed her to have an outstanding warrant.

Scott was taken into custody without incident, transported and booked into the Mohave County Jail.

He was taken into custody and booked into the Mohave County Adult Detention Facility.

Approximately 3 p.m., deputies contacted a 46-year-old male victim who reported he had been involved in an altercation Oct. 4 at a business in the 2400 block of Northern Avenue.

The victim told deputies that during the incident, Werstler began punching him which caused him to fall to the ground.

The victim reported that while on the ground, Werstler continued to kick him in his side. The victim told deputies he went to Kingman Regional Medical Center for treatment and provided deputies with paperwork from KRMC showing he suffered multiple rib fractures and several abrasions to the face. A witness at the scene confirmed the victims’ statement.

A short time later, deputies responded to a business in the 2200 block of Oatman Road and contacted Werstler.

Werstler allegedly admitted to being involved in the altercation. He was taken into custody without incident.