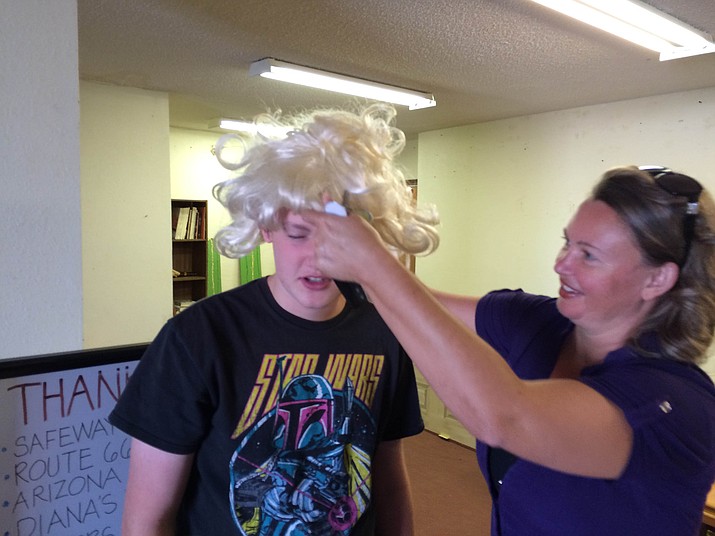 Kingman Center for the Arts co-founder Kristina Michelson believes in the future of Beale Street Theater. Michelson and her group are hosting Zombie Fest in Metcalfe Park from 6 to 9 p.m. Saturday as a fundraiser in the quest to renovate the building on the corner of Third and Beale streets. Below, Michelson helps her son, Spencer, try on a wig.

KINGMAN – When Kristina Michelson walks through the dilapidated Beale Street Theater, she sees the glass as half full.

Plaster is peeling off the walls, the ceiling shows large blotches of water damage, electrical wiring is spliced and exposed, pipes are rusted and broken, and the interior is generally in shambles.

“It’s got potential,” insists Michelson, cofounder of Kingman Center for the Arts, a nonprofit group formed earlier this year with a mission of renovating and restoring the theater that was most recently home to Boston Antiques.

It’s going to be a while before crowds come into Beale Street Theater to watch live dance and theater productions and classic movies.

There’s no timetable for opening at this point, as the group must raise about $500,000 to complete construction work necessary to bring the building up to code, Michelson said. The fire sprinkler system alone is estimated to cost $80,000.

“Our first step was to set up the 501(c), and we recently got that from the IRS. Now we can move forward with materials testing on the property,” she said.

The building has undergone several material and structural assessments in the past without any major issues, Michelson noted, and a volunteer architect with the nonprofit group is preparing a detailed report of the building and its operating systems.

In the meantime, Kingman Center for the Arts is forging ahead with plans to develop arts-based programs here, starting with the Art in the Park fundraiser held in August.

On Saturday, the group is holding Zombie Fest 2016 from 6 p.m. to 9 p.m. in Metcalfe Park, 315 W. Beale St. It features a live theater production of “10 Ways to Survive a Zombie Apocalypse,” a play that Michelson came across while researching for Art in the Park.

The play has a cast of 15, including Michelson’s son, Spencer, a freshman at Lee Williams High School who will be playing the part of one of the zombie survivors.

Kingman Center for the Arts is putting on two children’s theater productions of “The Nutcracker” Dec. 2-3 at Lee Williams High School, and recently held auditions for “A Christmas Carole.”

Originally from Utah, Michelson is an advocate of the arts with teaching and performance experience in music.

She plays piano, saxophone, clarinet and oboe, and was in a professional hand bell choir in Las Vegas before moving to Kingman about three years ago.

She hooked up with Sara and Nate Peterson, who bought the theater for $150,000 and cofounded the Kingman Center for the Arts.

A third-generation artist and art teacher, Sara Peterson had a vision to create more opportunity for arts in Kingman and was the catalyst for Kingman Center for the Arts.

“We want live theater and there’s nothing to stop us from getting a theater program up and running in this community,” Michelson said.

The theater opened in 1939 at Fourth and Beale streets, and was built by Harry Nace as part of the Lang movie chain. It closed in 1979, and later operated as a church and furniture store.