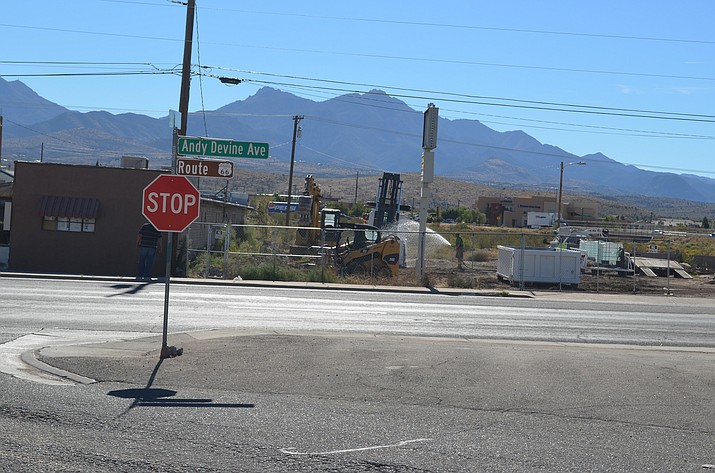 The vacant lot where the former motel and apartment complex once stood.

KINGMAN – Out with the old, waiting for new.

Old Trails Demolition crews picked up the final blocks of what has been known as The Desert Lodge Apartments, The Bel Air Motel and Bells Motel on Route 66 near Dambar Steakhouse Tuesday.

The building – estimated to have been built in the 1940s using local stone and rock – was just one of many historic properties that have been demolished recently.

Julie Lackey, co-owner of Old Trails Demolition, said the company was hired by a California man she said owns the property. Despite numerous attempts, he couldn’t be reached for comment.

Kingman resident Shirley Bowers grew up at the motel. She said her parents – Jimmy and Loraine Richardson – owned the building from 1951 to 1982. She said they purchased the building, which according to both her and the Mohave Museum of History and Arts, was called Bells Motel.

“They changed the name to the Bel Air Motel,” she said. “My dad manicured that whole place.”

She lived there through her years at St. Mary’s Catholic School until graduating Kingman High School in 1974.

“My parents sold it and it went downhill from there,” she said.

Lackey said some of the rocks will go to the Kingman Historic Preservation Commission to build a monument that will house a time capsule to be placed by the train depot.

“The tufa stone from one of the units in that motel will be put around the base,” said C. Russell, who is building the monument.

Old Trails demolished a thrift store on the corner of Third and Beale streets shortly after Andy Devine Days. Another building on the same block is slated for demolition later this month. Both buildings are owned by entrepreneur Werner Fleischmann of Fleishman Investments, which owns Brunswick Hotel and the recently refurbished Beale Celebrations.

Kevin Morgan, owner of Axiom Construction, has been contracted and has been working Fleischmann on the downtown projects for roughly five years.

“In my opinion, he’s the catalyst for the upsurge downtown,” Morgan said. “There’s not a bigger advocate for downtown development.”

Morgan said Fleischmann approached him about remodeling several properties, many of which are falling apart have no structural integrity. There have also been squatters found living in the dilapidated buildings. Axiom employees have found buckets of human waste and drug paraphernalia in the buildings before demolition crews cleaned the scene.

Morgan spoke of ideas to gut the buildings, leaving the original facades, but evaluations of the building conditions nixed those plans.

“The cost to refurbish was just too much,” Morgan said. “My advice to (Fleischmann) was to start over.”

Morgan said city officials were anxious to see some improvements.

“They basically said ‘you need to get them up to code or get rid of them’,” he said.

Morgan couldn’t confirm any solid future plans for the properties.

“It makes me sad,” Bowers said. “Kingman is getting torn down.”

She felt that out of town developers don’t have the same sentimental value of local properties. Morgan felt otherwise, especially in regards to Fleischmann’s past success.

“If you look at what he started, I trust what he puts down there will be better than what was there,” Morgan said.

“I’d like to see more buildings refurbished,” Bowers said. “If they can’t, don’t just tear them down, put something there.”