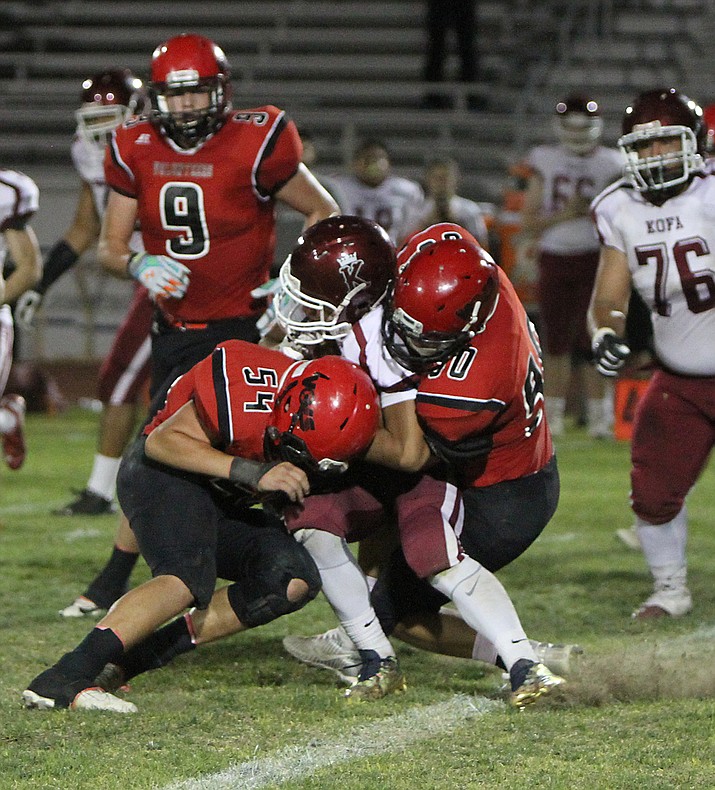 Lee Williams’ Matt Shaw (54) and Kael Juelfs (90) take care of a Kofa ball carrier during the Vols’ 14-13 win Friday at LWHS. Juelfs and Shaw combined for 25 tackles in the win. 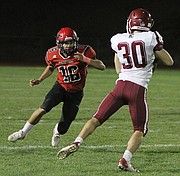 KINGMAN – The Lee Williams Volunteers had been implored by their coaches all season long not to get down when their opponents have success. The Vols found themselves trailing Yuma Kofa twice in Friday’s non-region game at LWHS, but the Vols bounced back each time and then held off the Kings twice in the fourth quarter to preserve their 14-13 win.

“If you have a good defense you have a higher chance of winning,” said linebacker Kael Juelfs. “It is so awesome to have a defense that makes big play after big play and stop after stop and ultimately gets our offense back on the field and give us a chance.”

Juelfs and senior linebacker Andrew Davis led the Vols with 14 tackles each. Sophomore Hunter Sturgill made 13 from his safety position, and Matt Shaw had 11.

Early on, it looked like Kofa (5-4, 6A Southern) just might be king. Kofa had the first possession of the game and promptly marched 88 yards for a touchdown. It was possibly the only mistake the Lee Williams defense made. The Kings had fourth-and-2 on their own 46-yard line when Issac Marquez broke past the Vols and galloped for a 54-yard touchdown. The point after hit the left goalpost, and Kofa led, 6-0.

Lee Williams (4-5, 1-4 4A Grand Canyon) took the ensuing kickoff and got down to the Kings 6 before fizzling out. The Vols defense buckled down to keep Lee in the game. The offense finally found the end zone with just 25 seconds left in the first half.

Quarterback Andrew Herrera found Justin Sturgill streaking down the home-side sideline and behind the Kings’ defense for a 52-yard touchdown pass. Edmond Ashton’s point after was good, and the Vols led at the half, 7-6.

“The defense played great,” said LWHS football coach Jacob Iodence. “We went no pads this week to try and get the guys’ legs back a little bit.”

The third quarter began like the first – Kofa came out fast. Lee Williams took the kickoff, but the offense couldn’t get started. Mike Bathauer went back to punt for the Vols, and he had a hard time corralling a high snap. The ball got loose, Kofa’s Jonthan Franco (5-10, 235) scooped it up at the Vols 3 and put the Kings ahead.

Lee Williams got a 58-yard kickoff return from Justin Sturgill but was flagged for holding. The Vols got the ball at the Kofa 42 and seven plays later they grabbed the lead right back.

Sturgill set up the Vols’ TD with a spectacular grab at the Kofa 11 when he outjumped the defense. Two plays later Herrera found Ashton for a 9-yard TD pass. Ashton added the extra point for the lead.

Herrera went 12-for-26 for 192 yards, the two TDs and one interception. Sturgill and Ashton had identical receiving stat lines – four catches for 87 yards and a score.

The Kings managed to get inside Lee Williams’ territory with their final three possessions. All three times the Vols’ defense stopped the threats.

The game almost turned in the third quarter when Kofa’s kicker Ariel Beal’s boot fell just short on a 50-yard field-goal attempt. The Kings later turned it over on downs with 6:09 left in the game at the Lee Williams 31.

Kofa earned one more chance, taking the ball at their own 33 with just more than four minutes remaining. A 32-yard pass play got the ball down to the Lee 35. The Vols’ defense came up big one last time.

Defensive end Marco Narvarte caught up to Yuma quarterback Zacary Miller scrambling toward the far side of the field, swatted the ball away and Lee’s Tyler Miner recovered with 2:27 on the clock.

The Vols’ rode Davis to a victory formation and the win. Davis finished with 90 yards on 13 carries, and a win in his last home game as a Volunteer.

“This feels awesome,” Davis said. “The biggest thing for the seniors was to leave here without regrets. I think we did that.”