Column: How to shame a 14-year-old for being more American than you 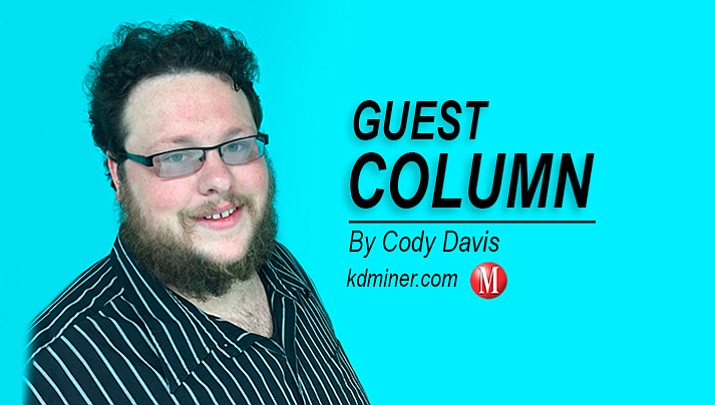 Because Kingman seems to have tons of real “tough” guys and gals on the local Facebook groups and in the Miner comment section who are suggesting the forced deportation (or worse) of a 14-year-old girl for a non-violent protest action, I thought we’d have a discussion about both patriotism and hypocrisy.

America is a place where one is supposedly guaranteed the right to speak and practice their religion how they please and when they please and in what manner they please so long as it does not bring harm to another human being. That means actual harm. Not your feelings being hurt. Harm. Abrasions, contusions, your reputation soiled – harm.

I’ll tell you what does not harm you. What does not harm you is someone sitting down during your favorite song. You don’t get to clamor that this girl is disrespectful while suggesting things like, “Well if they get welfare it should be taken away” or “We should send the mom and daughter to the Middle East and maybe they will learn to appreciate our country.” You have no moral high ground here. How dare you? When you say things like that, you are suggesting the antithesis of America. You’re suggesting that anyone who has a different opinion than a collective needs to have force acted upon them and they need to leave. And you cover it up with this misguided idolatry of military service members. “Oh, so-and-so I know/was related to was in the military and fought for our freedoms! You have to respect that!” No, you don’t. But if you did have to, one way to do it would be to refuse to participate in the popular fervor and groupthink we’re currently experiencing.

Our founding documents did not guarantee us the rights to “Life, liberty and the pursuit of happiness unless you don’t respect the flag, in which case you can go to a different country and may there be a pox upon your family.”

When I hear, “If you don’t want to say the pledge, that’s fine, but you have to stand and show respect,” I roll my eyes so hard they practically fall out of my skull. No I don’t. Don’t tell me what to do. You don’t own me.

My mind is not cowed by a piece of dyed cloth. I am neither a cultist supplicant nor a subject of a ruler. Neither are you. If you choose to behave that way, then good for you (I guess). Hooray. When you start implying a little girl is a terrorist – really? – who deserves to be deported because of a peaceful, non-violent decision she made that hurts your feelings, then the person who really needs to go somewhere is you. And where you need to go is a voluntary mental institution because you’ve got a serious problem.

That’s not Americanism. That’s not freedom, or liberty, or justice – that’s absolute madness; a frightened mass hysteria that stands to scorch every hint of those three beautiful concepts away. It’s known as reactionary nationalism. And it’s the kind of things service members have actively and JUSTLY tried to keep out of our lives. Now, in their name, you march onward, demanding everything you disagree with either comply or be eradicated.

Here’s your problem: you think you love freedom but you don’t understand it.

The intentions you make clear with your words are not benefiting freedom. You preach against it. You act against it. Being free means not owing a thing to anyone else, and demands that no person or group or institution can tell you you’re wrong enough to have your rights be disregarded.

The Declaration of Independence states that all men are created equal.

It does not say that “all men are sort of created equal, more equal if they justify their existence by knowing someone who served in the military, and then those people are qualified to pick on a 14-year-old girl exercising her own rights.”

Being a tough guy for America by picking on a kid, huh? I’m sure… somebody’s proud of that. Somewhere. Bet he wants to promote “freedom” by stop-and-frisking you for weapons.

Dear Abby | Mom’s meddling adds stress to the arrival of first baby
Dear Abby: Lost dream of grandparenthood leaves hole in woman’s heart
Dear Abby | Long-married couple wonders if being ‘swingers’ is for them
Column | What have you done for us lately?
Dear Abby | Wedding planning is driving close mom, daughter apart