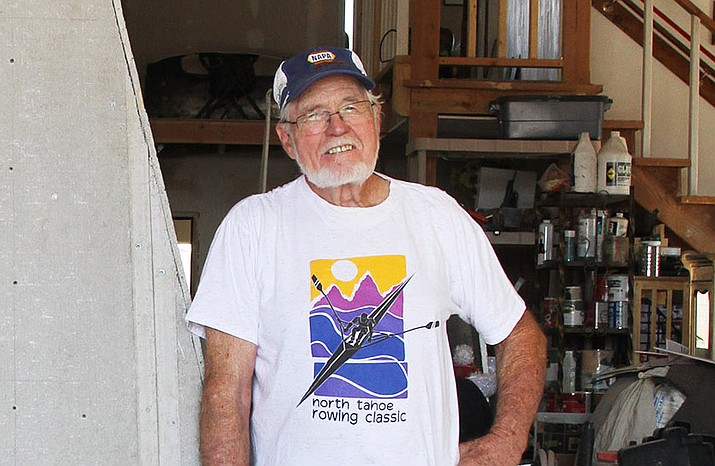 C. Russell stands by the monument he is building inside his garage Friday. It will contain a time capsule full of Kingman’s history. Various rock specimens from around Mohave County will be used to decorate the monument.

KINGMAN – Stones from the recently demolished Desert Lodge Apartments/Bells Motel on Route 66 are being recycled back into history.

Self-proclaimed rock hound C. Russell (he simply goes by the first initial “C”) is using some of the chunks to build what will be called the Miner’s Mineral Monument to be placed downtown near the train depot.

He got the idea from his wife, Nannette, who as a member of the city’s Historic Preservation Commission, who came across some old photographs of the original monument built in 1904, which was located on what is now Fourth Street. The monument was torn down in the 1940s.

Russell has been working with his wife, the HPC and Arizona Explorers to get the project off the ground. Similar to the monument at Metcalfe Park, the miner’s monument is slated to house a time capsule. Russell said HPC staff liaison Bill Shilling is tracking that effort.

“The HPC decided to add a time capsule as part of the monument to recognize and honor the community’s history in the mining industry,” Shilling said.

“The idea has been hashed around for years,” Russell said. “We started putting things in motion in February.”

Along with stones from the motel, Russell and his pals from Arizona Explorers, a group of quasi-geologists amd off-roading enthusiasts, have been collecting rocks for the monument. The stones – which include tuff, flagstone, agate and copper ore – come mostly from Mohave County. Russell said the monument will be 10 feet tall and eight feet square at the bottom.

He would like to have the monument completed by the end of the year ,but keeps hitting snags in the process. One assistant had to quit do to failing health.

“I was shooting for Andy Devine Days,” he said. “I’m so far behind it’s not funny.”

Both the monument and time capsule projects are still a ways from completion. Shilling said he has no idea what’s going in the capsule. Ideas include a newspaper, phonebook and a cellphone. He hasn’t identified a container yet. The HPC is waiting on the exact size of the monument before making a decision.

“We have time to decide, but not much space,” he said.

Russell is also chairman for the Clean City Commission and wants to continue to see development breathe life into downtown. Both men agreed of the need to preserve Kingman’s past.

“The monument will be something to help us take pride in our mining history,” Russell said.

The HPC has to make a final recommendation to city council before adding items to the time capsule. Schilling said if someone does have a small item they feel is important, they can contact an HPC representative at 928-753-8130.

Fourth Street monument helps preserve Kingman’s mining history
A Monument to Miners: After being torn down in the '40s, it's being replaced
Demolition activity comes to Kingman
Fond memories are stored with time capsule
Kingman Gems