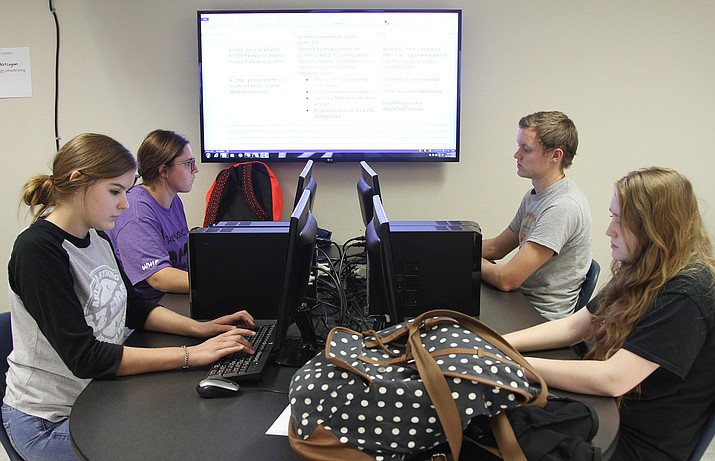 From left to right, Serenity Lynch, Delanie Cencelewski, Scotty Winder and Michelle Thomas study in a sophomore through senior Accounting Class of Business Management and Administrative Services at Kingman High School in October.

KINGMAN – Students at Kingman High School are critically behind their peers who attend Lee Williams or Kingman Academy high schools, according to results of the 2015-16 AzMERIT testing in English and math.

Scores have been reviewed by district and charter school administrators as students begin testing for this academic year. Fifty percent of Academy students passed the two classes, 49 percent in English and 51 percent in math, while Kingman Unified School District high schoolers averaged 28 percent in both subjects.

The overall math scores – an average in algebra 1 and 2, and geometry, were separated by a wide chasm. By school, a 43 percent grade was earned in English at the Academy, 30 percent at Lee Williams and 16 percent at Kingman High.

The falloff was even more dramatic in math: Only 8 percent passed at Kingman High, while the Academy came in at 40 percent and Lee Williams at 28 percent.

Mohave County as a whole scored 35 percent in English and 36 percent in math.

The Arizona Department of Education released the results of the English and math assessments, known formally as Arizona’s Measurement of Educational Readiness to Inform Teaching, or AzMERIT, in September. This is the second full year of testing and administrators are struggling how to teach students to state standards.

Scores are recorded in subgroups of students based on gender, race and ethnicity, migrant status, students with disabilities, limited English proficiency, and homeless students, as well as the student body as a whole.

That last one is important because there are circumstances that suggest there is a reason outside of the testing that contributed to the low scores at Kingman High. The school has more at-risk and special needs students than do the Academy or Lee Williams – and there is a shortage of qualified math teachers.

Tested, but not taught

The scores of the high school students might not accurately measure their competence in either English or math.

There are no letter grades given. The report card-style grading for schools was put on hiatus when the AzMERIT began two years ago. Students don’t receive grades on the test, but are rated on a performance scale.

Kingman Academy Executive Director Susan Chan and KUSD Superintendent Roger Jacks weighed in on the importance of the test, what they do to prepare students for the test, how they’re improving scores and, a key concern, how much testing is too much testing.

“It’s important, unfortunately, because that’s how the public can judge schools,” said Chan. “If you’re looking for a place to send your kids to school, you compare scores. Scores are a reflection of what happens in that school.”

“The idea of the test is to see if students are ready to move on to college or careers,” said Jacks.

Preparing students and teachers involves teaching to state standards. The AzMERIT is more than just a test of memorization. Critical thinking skills are needed to solve problems, and those problem-solving steps are part of the test.

Chan said teachers have to teach material in a way that helps to think at a high level.

“If you’re not teaching to the level of the standards, they’re not going to get it,” she said. “We teach to the standards. Period.”

She added there has to be source material based on the state standards to help teachers, and thereby their students, to be successful.

“You have to provide your teachers with the right materials,” Chan said.

“That’s how we help our teachers. In turn, that helps our students.”

“We also take mid-quarter and quarterly computerized assessments that prepare students for taking AzMERIT,” he said

Jacks cited the uneven proportion of at-risk and special needs students between the schools for the scoring gap between Lee Williams High School and Kingman High School.

He felt the lack of qualified math teachers at KHS is what led to the low math scores.

“We’ve had a high teacher turnover at KHS and more stability at Lee Williams,” he said. “I think that contributes to the differences in scores.”

Both districts use benchmark testing for each subject in between AzMERIT testing periods to measure student progress.

“This is a new assessment and we have to raise the level of rigor for our students,” said Jacks. “What we’re looking for is academic growth.”

Remedial instruction is one of many safety nets in place to help struggling students.

“We, as educators, have to be willing to do that,” said Chan.

Chan was disappointed by the 2014-15 AzMERIT scores not being up to expectations. Her solution was to meet with teachers for ideas and suggestions to help kids learn in the way to meet AzMERIT standards, and scores have steadily improved.

“Yes, our scores are good,” Chan said. “But that doesn’t mean we don’t have room for improvement.”

To Test or not to Test

“There is a balance between testing and not testing,” said Jacks. “There’s always a concern that we’re testing too much. We have those discussions all the time.”

Jacks knows the schools do their best to use the instructional minutes they have, but said assessments have to be given to gauge success.

“What we need to do is accept the idea that assessments are part of the learning process,” he said. “Assessments are important to make sure the students are mastering what is being instructed.”

“It can be self-motivating for a student if they’re monitoring their progress,” said Lisa Sipe, district assessment coordinator.

She said students seeing their scores increase motivate them to continue pushing themselves.

Both superintendents said the schools are testing less than in the past, but assessments are necessary to student development.

“I feel like the testing that we do is productive and helps to determine what the students need to be taught,” Chan said.

“The whole idea of an educational year to me is a building block approach,” said Jacks.

Sample tests can be taken at www.azed.gov/assessment/azmeritsupportmaterials/