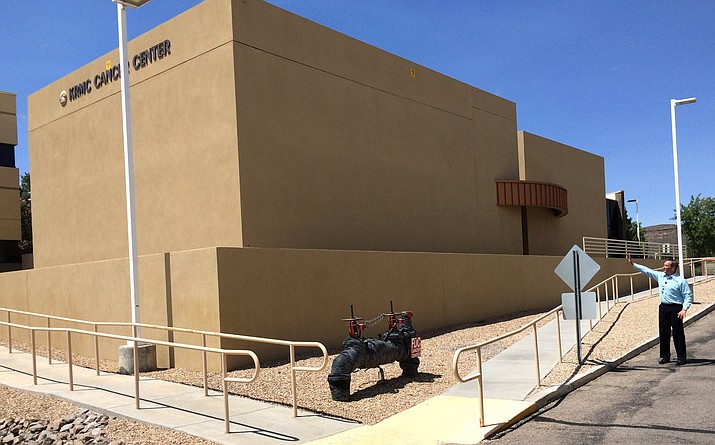 KINGMAN – Kingman Regional Medical Center plans to roughly double the number of emergency room patient beds – from 27 to up to 57 – at the hospital’s Stockton Hill Road campus in 2017 as part of a major five-year projects plan.

According to Ryan Kennedy, KRMC chief operating officer, a five-year expansion plan is based on population demographics and projected needs for medical services in the region. Those needs are prioritized within budget constraints and other factors that impact hospital operations.

“Our goal is to provide a full range of quality health care services that meet the needs of our growing community,” he said.

Highlights of the plan include expanding the KRMC Emergency Department and Cancer Center, constructing a new medical office building at KRMC-HMC and moving the obstetrics and maternity ward to KRMC-HMC. None of the projects’ financial costs or construction plans have been finalized yet.

KRMC plans to expand its Beverly Avenue cancer center to meet the growing need for treatment services. An expansion a few feet out from the existing building will accommodate a new state-of-the-art linear accelerator – along with one already on site – for advanced cancer treatment capabilities.

In order to accommodate the addition of a pharmacy and additional clinical trial and patient care space, the Sleep Disorder Center adjacent to the cancer building will be moved to KRMC-HMC.

Kennedy is waiting for supporting construction documents and KRMC Board of Directors approval before green-lighting the project. Completion is expected in late 2017.

Plans to expand the capacity of the emergency department on the main KRMC campus are slated for 2017. The current facility sees over 53,000 patients a year. The expansion will add 20 to 30 patient beds to the existing 27-bed facility.

“The expansion will promote patient flow and will enhance patient privacy,” said Kennedy.

Completion of the expansion is expected in late 2017 or early 2018.

“For budgetary purposes, until we get contractor bids, we don’t have any projected costs at this time,” he said.

KRMC does not plan to open a second emergency department at the Hualapai Mountain Campus in the next five years. Kennedy said it’s currently not feasible. Even if the development of Kingman Crossing is expedited, Kennedy said it would not change that decision.

“If and when the time comes, there is space,” he said. “Expansion at KRMC will easily satisfy services for the community for the next five years.”

Construction of a new medical office building next to KRMC-HMC will accommodate additional physicians and patient demand is planned to start in 2018. The buildings will house medical practices and offices.

“We continue to recruit more doctors and physicians to the community,” said Kennedy.

Obstetrics, maternity ward and nursery will be moved to the Hualapai Mountain Campus’ third floor following the completion of the new medical office building. The move will allow for more private patient rooms at both KRMC campuses.

KRMC-HMC has four floors. Public relations, information technology, outpatient therapy and pain management occupy the first floor. Acute rehabilitation is on second floor. The fourth floor is unoccupied. All floors have water, electricity and air conditioning. Kennedy said the combined costs for gas, electric and water for KRMC-HMC and the adjacent medical office space was about $525,000 last year.

Construction documents, architect schematics and contractor bids are still weeks to months out, depending on the project. KRMC will dip into financial reserves or take out loans to fund the expansions.

There’s no solid figure yet on the number of jobs – for both KRMC and contractors – that will be created. Kennedy said there will always be potential for growth and that staff will be added accordingly as the patient volume and demand dictates. The KRMC Board of Directors will do its best to hire local and competitive contractors.

The most recent significant expansion was KRMC’s acquisition of the Hualapai Mountain Campus from MedCath Corporation in 2011.

KRMC is the largest employer in Mohave County with an estimated 1,830 employees.

Kennedy said that the projects will be completed in succession rather that all at once.

“It’ll be good for the community from a growth standpoint and accommodate ongoing health needs.”