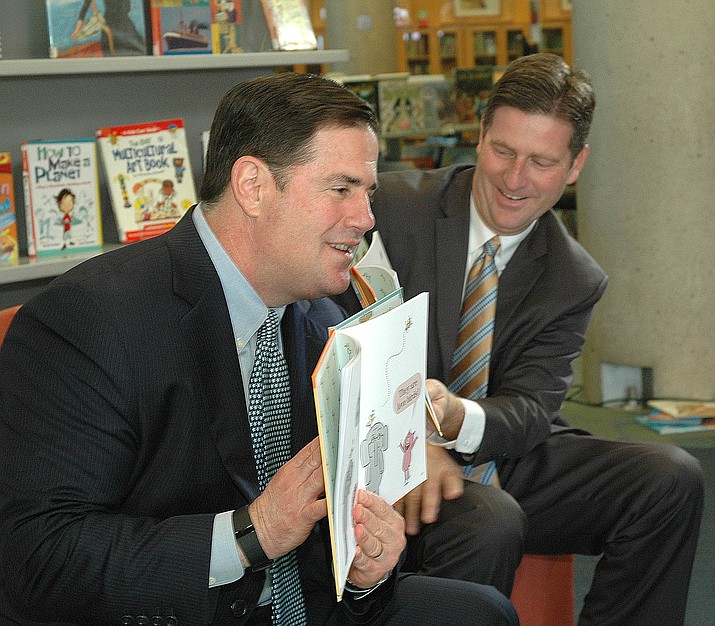 Gov. Doug Ducey is refusing to take sides in the latest dust-up between his party’s presidential nominee and the state’s junior senator.

“I’m supporting Republicans across the board,’’ the governor said Tuesday after being asked about Donald Trump sending out a pair of tweets this weekend blasting Jeff Flake. In one, the candidate called out Flake as “weak and ineffective.’’

The messages followed Flake appearing on Sunday talk shows saying he still could not commit to voting for the party’s nominee and calling what Trump said in Phoenix last week about his immigration policy “just confusing.’’

Ducey, for his part, won’t intercede.

“We’re going to let the campaign play out,’’ the governor said.

“We’ll know in the next 60-plus days who the next president is,’’ he continued.”But you know where my support is.’’

And Ducey said that, whatever Trump’s flaws, he considers the real estate billionaire a better alternative than Hillary Clinton.

The latest very public dust-up is a continuation of the rocky relationship Flake and Trump have had now for some time.

In July, Trump met behind closed doors with U.S. senators. When Flake stood up to introduce himself, Trump said, “You’ve been very critical of me.’’

Flake conceded the point, saying he’s “the other senator from Arizona, the one who didn’t get captured.’’ Flake had lashed out at Trump following a 2015 comment from the candidate that John McCain is not a war hero because he was captured during the Vietnam War.

“I like people who weren’t captured,’’ Trump said at the time.

It was at that July closed-door meeting that Flake first told Trump he was not sure he could back his party’s nominee. That led to Trump responding that Flake would lose his reelection bid, apparently unaware that Flake is not on the ballot for another two years.

It got no better this weekend.

On a pair of talk shows Sunday, Flake repeated that he cannot commit to voting for Trump. And he took a specific swat at Trump’s speech the prior Wednesday in Phoenix where the candidate said if he is elected there would be no path to legal status for any of the 11 million people in this country illegally.

“Some people said it was a hardening,’’ Flake said.

“Some said softening,’’ he continued. “I say it was just confusing.’’

Flake also described Trump’s plan to build a border wall and have Mexico pay for it as unrealistic.

And he said that Trump could end up having Arizona do something it hasn’t done since 1996: support a Democrat for president.

“Arizona should still be a red state,’’ Flake said. “But Donald Trump, with the rhetoric that he’s under and the characterizations of many of the state’s population, have put the state in play.’’

Trump wasted no time in responding.

“The Republican Party needs strong and committed leaders, not weak people such as Jeff Flake, if it is going to stop illegal immigration,’’ he tweeted Sunday afternoon.

Two hours later, Trump was back online, saying “The Great State of Arizona, where I just had a massive rally (amazing people), has a very weak and ineffective Senator, Jeff Flake. Sad!’’

Ducey steered a wide path around the political smashup when asked about it Tuesday.

“I’m going to let Donald Trump speak for himself on his campaign,’’ the governor said. But Ducey suggested that Trump can pretty much say anything he wants and not lose his support.

“I’ve compared him with the Democratic nominee of Hillary Clinton, the things that are important to me, like (who gets to choose) a Supreme Court justice, like real change in Washington, D.C., like respect for our law enforcement community,’’ Ducey said. “That’s why I am supportive of Donald Trump and the Republican ticket.’’