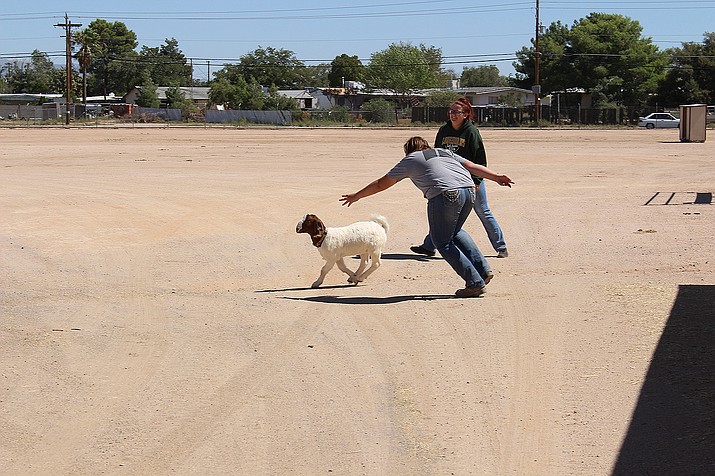 Members of the Kingman High School Future Farmers of America program were busy Wednesday trucking their animals to the Mohave County Fairgrounds.

KINGMAN – Members of the Kingman High School Future Farmers of America program were busy Wednesday trucking their animals to the Mohave County Fairgrounds.

“We’re just excited about this year’s fair,” said Cassie Vroegh, FFA advisor at the school. “We’re building our FFA chapter and we’ve put a lot of time and effort prepping for this.

“We hope that everyone comes out to see the animals and support the kids,” said Vroegh, who was right in the thick of the action while making sure the animals were unloaded safely into their stalls.

Billie Klein, 16, and a junior, had her hands full at noontime while unloading her goat.

“Oh, he already ruined (his stall). He pooped everywhere,” Klein told her friends. “He” would be Alfie, and Alfie wasn’t satisfied with just breaking in the stall.

He later escaped, forcing Klein and Kierstin Hays, 17, a senior, to chase him around the fairgrounds.

Roxanne Kitchen, 18, a graduate of KHS this year, also was busy coaxing Snow White, a pig, into a stall. She said the last time she weighed him she tipped the scale at 230 pounds.

She guessed Snow White was probably up to 250 to 260 pounds. “I bought her in April. She was only 35 pounds when I got her,” said Kitchen.

This was her third pig entry at the fair and her fourth fair project.

“I love the pigs especially.

They have a lot of character.

“I just really like this (FFA) club,” said Kitchen.

She explained that in order to show an animal, a student learns about budgeting and responsibility.

The animals have to be fed and exercised, too, she said. Students have to do all of the work.

The goat show is scheduled for 4 p.m. today, while the swine show follows at 7 p.m. The auction is slated Saturday at 6 p.m.

All of the animals are market animals, according to Vroegh.

With FFA and 4-H, students learn a lot - and can also make money
Months of work to pay off for Kingman FFA students
Kingman FFA members ready their animals for auction
Fair participants serious about animals - this is no pet project
4-H participants put it on the line at Mohave County fair