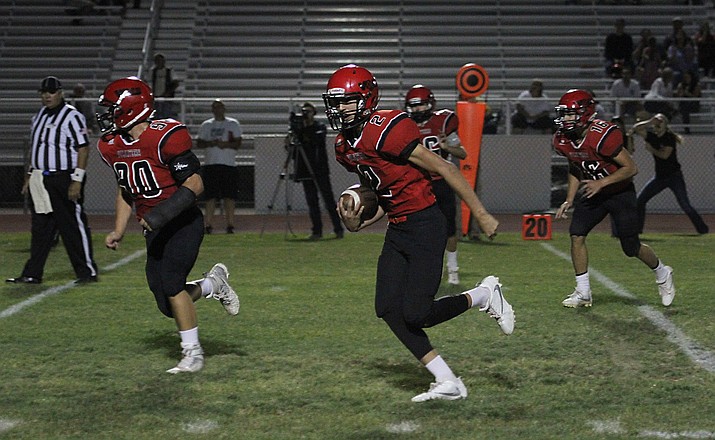 Andrew Herrera runs back an interception for 25 yards with Kael Juelfs (90) leading the way for a touchdown Friday.

KINGMAN – It looked as if Lee Williams was going to give Mingus a run for its money in the Grand Canyon Region opener for both teams Friday at LWHS. It lasted for three plays and two minutes, and then Mingus used its brute force to take the 35-14 win.

Mingus (2-2, 1-0 Grand Canyon) fumbled the opening kickoff and the Volunteers’ Aaron Santos recovered the ball on the Mingus 36. Andrew Davis rushed for 14 yards on the next play and Lee Williams (2-2, 0-1) had first-and-10 on the Mingus 22.

Davis was then dropped for a 2-yard loss and was followed by quarterback Daniel Mazon getting picked off leading to a 25-yard interception return by the Marauders’ Juan Ruiz.

Five plays later, Mingus had its first score when Ruiz scored on a 6-yard touchdown run. The Marauders would score twice more in the first quarter to put the game out of reach.

“We came out timid at first,” said LWHS coach Jacob Iodence. “We’re kind of a slow starting football team right now, and it’s something we’re going to work on fixing.”

The Vols caught a break in the second quarter when Andrew Herrera intercepted an errant Mingus pass and returned it 25 yards for a touchdown. Edmond Ashton’s point after was good, and the Vols had the lead narrowed down to 21-7.

The Lee Williams threat lasted only a couple of minutes after Herrera’s touchdown. Mingus took two plays on its next possession to go 44 yards for a touchdown and a 28-7 lead at halftime.

The scoreboard did not reflect on the Marauders domination. Mingus plundered the Lee Williams defense for 503 total yards, 296 rushing and 207 through the air. The Vols could only manage 93 against the stiff Marauders defense. Mazon completed 7-of-12 passes for 70 yards with one touchdown and two interceptions. Andrew Davis was held to 32 yards on 14 carries.

Mazon’s touchdown throw came midway through the fourth quarter when he hit Santos for a 7-yard strike. Ashton added the extra point to make it 35-14.

Kael Juelfs led the Vols defense with nine tackles. Davis, Herrera and Ashton each had six. Marco Narvarte had a sack and three tackles, and Justin Sturgill brought down an interception.

The game may have had a different flavor if the Vols converted on that early turnover and took a lead on Mingus.

“If we could have punched it in and gone up, 7-0 …,” Iodence said. “It seems we come out and are always fighting the uphill battle – the momentum.”