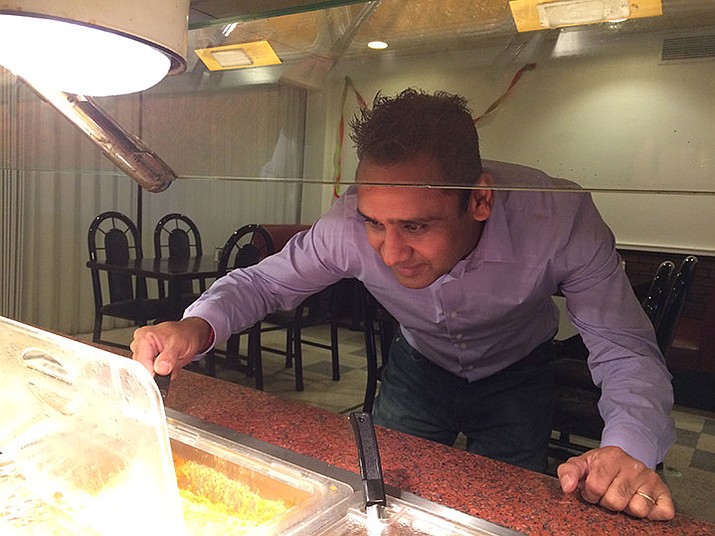 Neel Patel, owner of India Spice-N-Bar restaurant that opened Sept. 5, checks on some of his food dishes after a busy lunch hour.

KINGMAN – The first couple weeks have proved quite promising for new restaurant owner Neel Patel, who is busy catching up after a strong lunch crowd clears out of India Spice-N-Bar at 2890 E. Andy Devine Ave. on a Tuesday afternoon.

He served 70 to 80 customers in an hour and a half, including a busload of Japanese tourists and a throng of locals who’ve discovered that Indian food is not as spicy as advertised – unless you order it that way.

Those are exactly the customers he’s relying on to make a go of it at the restaurant he opened on Sept. 5.

India Spice isn’t going to “Americanize” its menu, but the recipes may be toned down a little on the spice level, Patel said.

“My goal is to make it for everybody, Americans and tourists,” he said.

Patel, who also owns the nearby Lido Motel, invested about $700,000 to buy and renovate the 145-seat restaurant and bar that was formerly ABC Buffet. He expects to get his liquor license next month and serve Indian beer such as Kingfisher, Taj Mahal and Haywards 5000.

Patel, 42, immigrated to New Jersey with his family in 1995, and operated an Indian restaurant next to Wynn Las Vegas before coming to Kingman two years ago.

“I had experience in the restaurant industry,” he said. “I stayed here two years and there was no Indian restaurant in a 100-mile radius. They have to go to Las Vegas or Flagstaff. So it was in my mind to open a restaurant since I came here.”

The bar area, dark until the license arrives, has been upgraded with new carpeting, and the kitchen has been thoroughly cleaned and remodeled with tandoor clay ovens.

“Without this, we cannot cook,” Patel said of the ovens. “Every Indian restaurant has to have that.”

India Spice has received several favorable reviews on Yelp since opening, both from locals and travelers. They found the tandoori chicken and goat vindaloo to be delicious dishes, and were impressed with the naan bread delivered to the table. Prices are around $10 for lunch, $15 for dinner.

“I was very impressed with the food these guys are serving,” wrote Tim M. of Kingman. “Excellent Indian food. The buffet is great and it gives you a chance to try a lot of different dishes without having to commit to one thing. You get a drink and fresh naan bread (mmmmm naan bread).”

The restaurant offers take-out meals and plans to begin delivery service in the next few months.