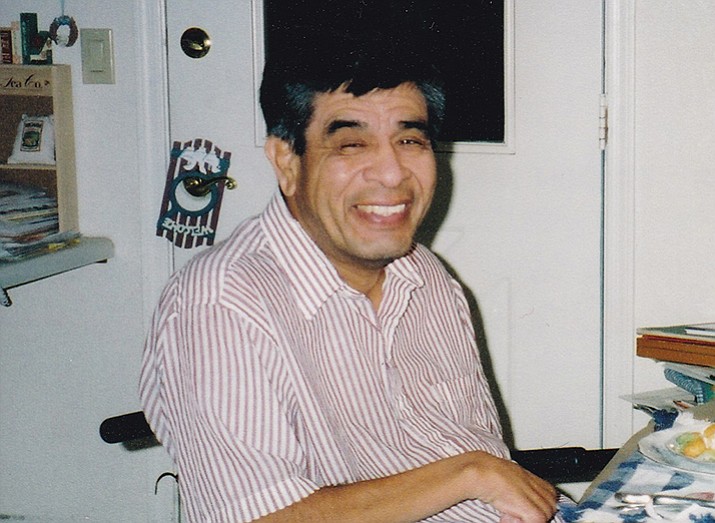 Leonard Phil Zeyouma of Kingman, Ariz. left his wheelchair outside of heaven’s gates on Saturday Sept. 17, 2016, at the age of 63.

Although bound by his wheelchair for nearly 42 years, he never let this interfere with his life. People remember him as being “kind-hearted”, “filled with life”, and having had an “infectious smile.”

Leonard was born in Parker, Ariz. on Sept. 19, 1952 to Madelene (Naranjo) & Philip Zeyouma and was the 5th of 6 children. Raised on a farm in Poston, Ariz. he learned to work hard and was very meticulous and dedicated in any job he ever had. He had a love for sports, especially football & baseball and participated in all 4 years of high school, with his brother & friend, Earl, who acted as an assistant coach in Leonard’s senior year. Leonard graduated from Parker High in 1971; he became a carpenter & loved his work. Although he loved sports, he had an even greater love for horses & nature and even though he was American Indian, descending from the Hopi & Tewa tribes, he was a cowboy at heart.

While living in Poston, it was there that he learned learned to rope and ride, catch wild horses and became a great fisherman. He raised and bred cattle for many years. He cared for his cattle to the best of his ability, even giving each a name! He loved his family and was a good friend to all. Leonard moved to Lake Havasu City in 1985 where he resided at the Havasu Nursing Center. It was there that he met his future wife, Karen Forrester, in 1986. They moved to Kingman shortly after and became united as one on March 18, 1989. He was a man who loved the simple things in life. He and his wife shared a love for nature, camping, going to concerts, taking trips, spending time with each other and their family & friends. But most of all he enjoyed raising their daughter, Carol Ann.

Leonard was the founder, along with his wife, Karen, of Angel Babies Perinatal & Infant Loss parent support group of Kingman. It was founded Feb 2005, after the loss of their son. It was an honor for him to help set up and arrange the Walk to Remember, held every year in Kingman since 2006. He and his wife had a great love for children. Family was his reason to keep going every day, even though his physical life had become increasingly difficult in recent times. Leonard was a man of God & loved being active at his home church, St. John’s United Methodist, in his own quiet & reserved way, never being proud, pompous or wanting recognition. Even when he graduated with a degree in Fine Arts, and drew and painted many beautiful pictures, he still would not accept recognition for the gift that God had given him. He was an honest man and never “wasted words”, always meaning what he said. He was compassionate & patient beyond measure and he lived beyond himself and his own needs or problems; always concerned for others, he would often wait for his own needs to be met. This special, beloved man left behind his loving, dedicated wife, Karen & his beautiful daughter, Carol Ann Marie. Other survivors are his older brother, Al & sister Connie Zeyouma both of Parker, AZ, his eldest half-brother Spin Zeyouma of Fountain Hills, Ariz., his aunt Charlotte Byestewa of Parker, Ariz., mother-in-law, Shirley Forrester of Kingman, Ariz., sister-in-law, Diane Bezanson & sister-in-law Kathy Burris and family, as well as many other relatives & friends.

He was preceded in death by his sister Nadine, his mother Madelene, father Philip, younger brother Harold, older brother & friend, Earl (2015) and many aunts, uncles and grandparents. He was also preceded in death by his son, Daniel Phil (2004) whom he will rest beside, at Mountain View Cemetery in Kingman, Ariz. and daughter Em (2005 miscarriage).

He is no longer in physical bondage and he will be greatly missed by all who knew and loved him. Run with the angels, my love, run. You are free!

Services will be held on Sat. Sept. 24 at St. John’s United Methodist Church at 1 pm with a viewing from 11 am-1 pm. Graveside services following with a reception at St. John’s Fellowship hall. If you wish to make a monetary donation in lieu of flowers please consider making it to one of his desired organizations: Angel Babies (Contact St. John’s UMC); St. Jude’s Children’s Hospital; the Ronald McDonald House; or Wheels for the World; or World Vision.