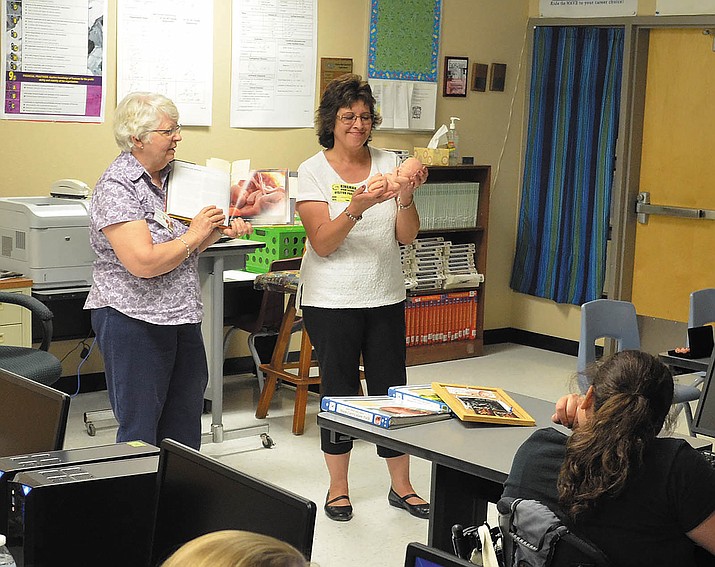 Advice and Aid Pregnancy Center nurse/volunteer Jan Mayr (left) and Director Teresa Reaume discuss the development of a fetus. during a recent visit to Kingman High.

KINGMAN – Students at Kingman High learned what happens when one becomes pregnant. It wasn’t sex education so much as visual and even hands’ on experience in how a fetus is developed.

Teresa Reaume, the director of the Advice and Aid Pregnancy Center, and volunteer nurse Jan Mayr paid their first visit to the school to give students a better understanding of the human gestation process. They also promoted the services the center provides to mothers and mothers-to-be in Kingman and Dolan Springs.

Eaton contacted Reaume earlier this semester. Eaton’s class contained freshmen to seniors, some of whom will go on to help teach pre-school at La Senita Elementary after their third year.

According to Eaton, the intent of the visit was to provide sound decision-making in the event of a pregnancy and to provide knowledge of the resources available. The class falls under the Career and Technical Education program, part of the Joint Technical Education District. Students can use what they’ve learned in his or her professional and personal lives.

Reaume and Mayr read from a book describing the early stages of pregnancy, while showing students pictures and reading off facts of embryonic and fetal development, such as when the heart, brains, lungs and skeleton begin to form and function. They also passed around rubber fetal models with physical qualities similar to that of a fetus developing in the womb from seven to 30 weeks gestation.

Mayr passed around images of an ultrasound and read more statistics about fetal development.

“At eight weeks, the mother will know if she’s pregnant,” she explained.

Both women went on to describe what the mother’s body will feel and why it’s important for the woman to take care of herself. “At the center, we make sure women understand the need for good nutrition,” Mayr said.

The child development course is not a sexual education class.

“Child development in general is the emphasis,” Eaton said.

Senior Makayla Karn was surprised by the biological capabilities and fetus’s sizes at each stage.

“I thought some of the babies would be bigger,” she said.

“I thought the baby could survive outside (the womb) at four months, not seven.”