Nothing to do in Kingman: Fact or fiction? 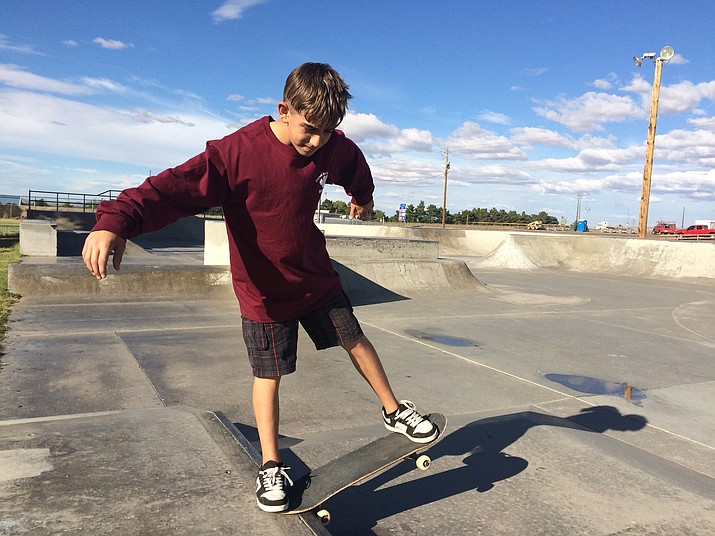 Justin Hamer, a seventh-grader at Kingman Middle School, likes to hang out at the skate park at Firefighters Memorial Park after school. He finds lots of things to do in Kingman.

KINGMAN – You hear it from kids everywhere, from adolescents to teenagers, from every generation: There’s nothing to do in this town.

Some parents might call that a lame excuse for being lazy.

Turn off the video game and go for a hike. Take up a sport or hobby. Join a club at school. Become a Boy Scout or Girl Scout. Volunteer for community work. Get involved with church activities.

Amanda Gatlin, parent of two teenage foster boys along with her 18-year-old adopted son, feels for the kids.

She recently moved back to Kingman after 10 years in Phoenix to be closer to family and friends, and says she quickly learned there’s not much for them to do.

“I suppose I knew this before I moved back, as I did live here for 14 years before Phoenix,” Gatlin said. “However, I still had hopes that maybe there would be a little something to get my boys involved in.”

She took her boys to play basketball at Centennial Park and someone offered them a marijuana joint, astonishingly in her very presence, Gatlin claimed. They went to the Green Hole on Eastern Street for Saturday morning flag football, but it was mostly adult men playing.

Is there really nothing here for kids to do? Or is that simply a myth?

“There’s no easy answer for anything, but I think that’s a cop-out, to say there’s nothing to do,” said Mike Meersman, director of Kingman Parks and Recreation.

There are plenty of things for kids to do here, he said, but it requires a little motivation, and that’s something that seems to be lacking with a lot of youths.

“Climb a mountain. Go to the park. We have lots of activities at Centennial Park,” Meersman said. “We have a skate park at Firefighters Memorial Park. We have a beautiful golf course.

“There’s a lot for kids to do, there really is. There’s just as much or more to do here than anywhere else.”

The Parks and Rec fall brochure lists specialty classes aimed at youths ages 14 and up including quilting and making tamales. Classes are offered in two age categories (ages 6-10 and 11-15) for ballet, jazz, contemporary dance and hip-hop.

Youth sports include tennis and racquetball lessons and a basketball league for boys and girls through sixth grade. It’s a lot more physical than playing NBA 2K15.

“No question, video games are a big downfall,” Meersman said. “There’s just too much of that. I just think we should limit their time on them. Same with computers.”

The Boys and Girls Club of Kingman primarily serves children 12 and under with after-school programs, but some programs such as the recently upgraded computer lab appeal to teens.

Director Bill Ward said the club received money from the national organization to work on remodeling a room for “tweens” and teens, as the biggest challenge at the downtown location is limited space.

“That age group doesn’t want to be with the little kids,” he said.

In Phoenix, Gatlin often took her boys to play Airsoft, a fast-paced game in which opponents shoot each other with small, plastic pellets fired from battery-powered weapons. Players wear protective vests, goggles, masks and body armor.

It kept them busy and let them burn off energy. The more she looked around Kingman, the more she thought an Airsoft facility would be awesome. It would probably draw from nearby cities, she figures.

“It’s much like paintball, but without the mess and in a lot of ways cheaper,” Gatlin said. “I think it would be really great and would give them something to do that is fun and safe.”

Gatlin set up an account on Gofundme with the goal of raising $30,000 to lease a facility, pay for insurance and purchase equipment. She also wonders if an investor might be interested in financing the business.

“My son and I talked about doing this in Phoenix for years, but I think Kingman is definitely the better and right place for the facility,” she said. “I just think it would be really great.”

Some states have placed strict legal restrictions on the game, as Airsoft guns resemble real weapons and there have been incidences of police shooting people carrying the guns.

“It definitely has ups and downs with the police, but we never had any issues,” Gatlin said. “I think it would help kids with gun safety.”

Hangin’ at the park

Justin Hamer, a seventh-grader at Kingman Middle School, says he absolutely disagrees that there’s nothing to do here.

He was skateboarding at Firefighters Memorial Park with his friend, Dave Amisone, on a Tuesday afternoon. He said he always comes to the skate park with anything he can find – skateboard, scooter or bicycle.

“There’s a lot of places to go,” Hamer said during a break from his skateboarding session. “Some of my friends, we go to Walmart and buy stuff. One time we built a toilet paper fort.”

And Amisone rattled off a list of recreational activities constantly going on at Centennial Park, Willows Park and the Green Hole, along with the splash pad at Cecil Davis Park.

“It’s free,” he mentioned. “I go in the splash pad and then dry off and play at the basketball court.”

He pointed to Mohave County Fairgrounds across the street from the skate park and talked about how cool the BMX track is. He mentioned the video game arcade at Cerbat Lanes bowling alley and Brenden movie theaters.

“You can go to the Hualapai Mountains. It has playgrounds and they have camping,” Amisone added.

Kingman does have the bowling alley and movie theaters, which is still relatively cheap entertainment for teenagers in a lot of towns. They both offer afternoon discount prices.

There’s also two public swimming pools open during the summer and the new splash pad that was installed this year at Cecil Davis Park.

And if the kids are open to learning something, try these options:

Mohave Museum of History and Arts: This is where the rich history of Northern Arizona is preserved. Exhibits include textiles and bead art, recreated Native American settlements and a portrait gallery of U.S. presidents.

Historic Route 66 Museum: Kingman kids need to know the story behind the Mother Road. This attraction inside the Powerhouse Visitor Center exhibits a variety of vintage ephemera from the heyday of the decommissioned route.

But let’s face it: You can’t play Airsoft in the museums.

Bicyclists and parents meet with park commissioners to ask for place to ride
Letter to the Editor: Kids and their bikes need a place
Column: Someone should step up for BMX, skateboard kids
Yearning for competition
Businesses come together to present Spring Thing
Event Calendar