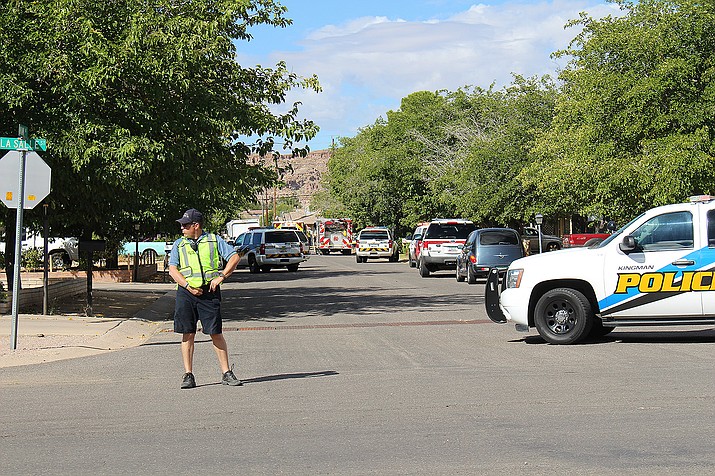 A Kingman police officer directs traffic Thursday morning at the intersection of La Salle Street and Miami Avenue following an officer involved shooting that resulted in a KPD officer being shot and wounded. The person who reportedly shot him is dead.

KINGMAN – A Kingman Police officer who was part of a team serving a search warrant regarding stolen property was shot and seriously wounded at a home in the 1700 block of Miami Avenue Thursday morning.

The suspect, Jeffrey Clair Cave, 53, of Kingman, was shot and killed.

It is unclear if the officer, who underwent surgery and remains in serious but stable condition, fired at Cave or if another officer shot the longtime Kingman resident. Cave died at the scene.

The Bullhead City Police Department is investigating the officer-involved shooting, the second one that has occurred in Kingman in the past month. On Aug. 29, an officer shot and killed 35-year-old Paula Dell after she reportedly aimed a loaded shotgun at him when he stopped to check on a stalled vehicle near the Walgreens on Stockton Hill Road and Andy Devine Avenue.

An obviously shaken Rusty Cooper, deputy police chief, advised the Miner of what had occurred shortly after the incident, but he referred questions to Bullhead City Police.

The shooting took place at about 9:45 a.m. and police and fire department personnel responded en masse to the normally quiet, tree-lined street.

The officer was treated at Kingman Regional Medical Center.