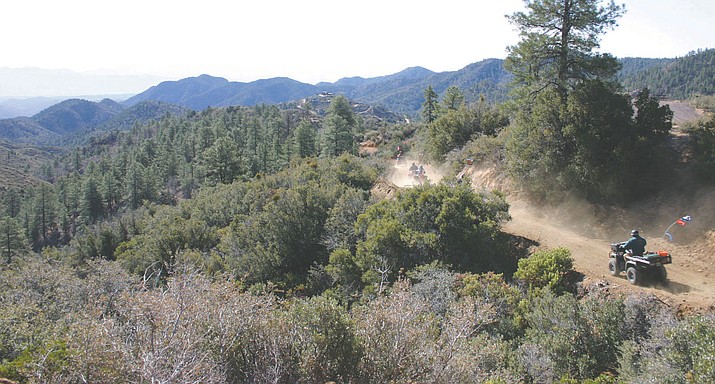 ATV riders travel along the Hualapai ATV Trail in Hualapai Mountain Park in April 2007. The trail connects with an extensive system of Bureau of Land Management land trails below. The BLM manages 2.5 million acres in the Kingman area.

Matt Driscoll hikes down a trail at the Cerbat Foothills Recreation Area near Fort Beale Drive in January 2013 after a new section of the Castle Rock Loop Trail had been built by various local groups and individuals. The 11,300 acre recreation area is a mix of federal, state, county, city and private lands.

Kingman rests in a valley surrounded by undeveloped land, much of which is public and managed by the government.

The Colorado River District of the Bureau of Land Management is one of the biggest land managers in the Kingman area.

The district stretches from Kingman to Lake Havasu City and south to Yuma and contains 4.9 million acres of land, said Lee Tucker, public affairs officer for the bureau’s Colorado River District. Nearly 2.5 million of those acres are located in the Kingman area alone, Tucker said.

The BLM in Arizona manages a total of 12.2 million acres of public land statewide, according to the bureau’s website at www.blm.gov.

“Much of this land is undeveloped,” Tucker said. “We manage the balance point between use of land and conservation of the land.”

Another big land manager in the state is the Arizona State Land Department, which manages about 9.2 million acres of State Trust lands, according to its website land.az.gov.

“These lands are held in trust and managed for the sole purpose of generating revenues for the 13 State Trust land beneficiaries, the largest of which is Arizona’s K-12 education,” as stated on its website.

The state land department did not respond to the Daily Miner’s request for an interview.

Casey Gordon rides his bicycle during a Chilling on the Monolith Trail Days fundraiser in June 2016 on BLM land outside of Kingman.

“The closest state park (to Kingman) is in Lake Havasu City,” Schlottman said.

Andy Whitefield is an environmental protection specialist for the BLM. “We manage land for the citizens of the United States as a whole,” Whitefield said.

Much of the land in Kingman is privately owned by the railroads, which came about in the 1920s as part of the push out West, he said. In the 1930s, a land conservation movement was born in this country. That paved the way for recreational camping, trails and hunting as permitted uses on BLM land. In the 1950s to 1960s, the public became more aware of the extent of the public land. The idea of conserving land for multiple purposes, including the idea of land for “public use and enjoyment,” was conceived.

“Visual resource management is part of what we do,” such as the “spectacular Joshua Tree area,” Whitefield said. This area has “unique and spectacular views.”

The wilderness areas have different levels of protection. The use for some areas is so restrictive that Congress “created the Arizona Desert Act that recognized there are areas where the footprint of man should not be permanent,” Whitefield said.

He said some areas should have “very little impact by man,” but the BLM still allows livestock grazing, for example. In the Kingman area, BLM land has a variety of purposes.

The BLM leases some of its land to the community for parks. In the Kingman area, it leases land for the Golden Valley and Mt. Tipton community parks. BLM land is also leased for shooting ranges, such as the Tri-State Shooting Park in Mohave Valley.

The BLM has a permitting system that allows private individuals to graze cattle on the land it manages. Mining and mineral extraction is another permitted use. The Bagdad Copper mine in Bagdad uses some BLM land.

Whitefield said the Cerbat Foothills area was developed for trails and has trailhead facilities. This BLM area is west of Kingman and is used both for hiking and mountain biking.

“A lot of work goes into managing undeveloped wilderness area,” he said.

The Joshua Tree Forest Grand Wash Cliffs area near Meadview is an example.

“This is an area of critical environmental concern” because of its “unique vegetation, the Joshua Tree,” Whitefield said. The area also has “scenic value as well.”

Schlottman said undeveloped land provides a “benefit to the quality of life.”

“A lot of people move out to Arizona because of its access to outdoor recreation,” he said. “At State Parks, we promote the health benefits of outdoor recreation.” Outdoor recreation gives people the “ability to get away from the pressures of everyday life … whether with family or through solitude with oneself.” It helps people “refocus.”

The abundance of outdoor recreation in Arizona is a “huge resource to the state and its people,” Schlottman said. “… It’s one of the priceless things that we enjoy in Arizona and what makes this state great.”