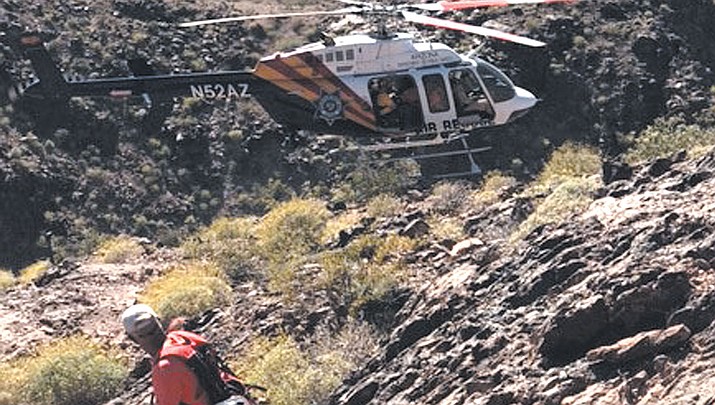 LAKE HAVASU CITY – The discovery of a body led to action by a Mohave County Sheriff’s Search and Rescue Unit Sunday morning.

According to sheriff’s spokeswoman Trish Carter, SAR responded to a recovery mission southeast of Oro Grande Boulevard and Mockingbird Wash, north of Sara Park, after Lake Havasu City Police Department detectives received a call that hikers had located the leg of a dead person protruding from a small ledge on the side of a mountain.

A technical rope team responded, and with the assistance of an Arizona Department of Public Safety Ranger helicopter, equipment was ferried to the top of the mountain.

A rope system was set up and the team rappelled to the body’s remains, which were then carefully packaged onto a medical stretcher and lowered to the bottom of the canyon.

The Ranger helicopter shorthauled the remains to an awaiting medical examiner investigator near Oro Grande Boulevard and Mockingbird Wash.

This was an extremely hazardous operation and completed without injury to SAR members, Carter said. Lake Havasu City Police Department detectives are conducting an investigation into the person’s death.