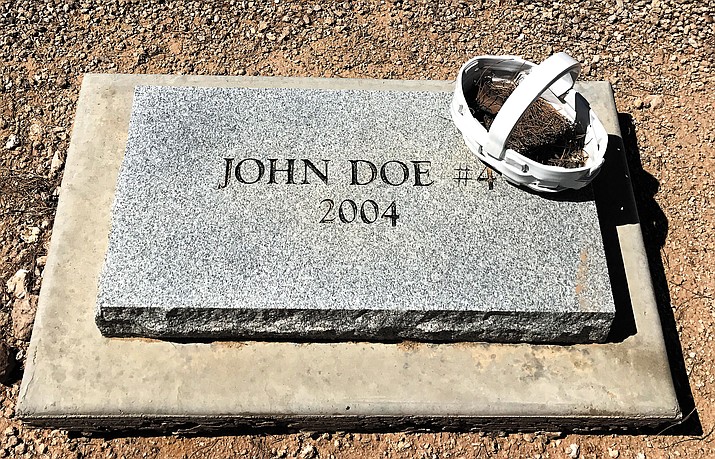 Headstones for the unclaimed and unidentified in a county plot at Mountain View Cemetery. 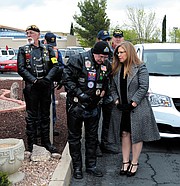 Cheap land, isolation and a multidirectional highway hub of cross-country travel lures everyone from transients to folks who just want to sever ties with the world to the expansive Mohave County.

Eventually they die without a tie to the outside world. Some outlive their relatives, their relatives want nothing to do with them or in the case of the homeless and transient – die in the desert or get hit by a train.

They’re just the tip of the headstone.

There are many more abandoned and unclaimed bodies – often identified, sometimes nameless – that travel several channels after making their final journey to the afterlife.

Rashida Suminski, public fiduciary director, said unclaimed – both identified and unidentified – bodies are sent to the local funeral homes based on a monthly on-call rotation list.

Depending on where a person passed away (at a hospital, nursing home or found in their home) and it appears they died of natural causes, the body will go to whichever funeral home is on the rotation list. Together with the funeral home, the fiduciary office scours the internet for public records and other links to locate family or friends.

“It’s a big effort to find the next of kin,” Suminski said.

“We do our own background checks,” said Suminski. “We go to the end of the line to find these Jane and John Does.”

Unclaimed and abandoned bodies are cremated unless proven religious beliefs dictate otherwise. The county pays mortuaries a $400 contracted rate for cremation. The fee comes out of the county general fund and is public record.

“This is a statutory program every county must have,” said Suminski. “Individuals must be buried or cremated if no one else comes forward. You’d be surprised how many people don’t have anyone.”

She didn’t rule out the desert taking its toll on rural denizens.

“I think there’s a lot of Does we don’t even find due to exposure. I think the landscape might have something to do with.”

There is no steady amount or pattern of unclaimed bodies going to the funeral homes.

In the last year, Sutton Memorial Funeral Home (including Desert View Funeral Chapel) has taken in 15 unclaimed bodies, including four veterans for a 2018 trip to Prescott National Cemetery.

Sutton is also handling the remains of the still unidentified and unclaimed African-American girl discovered by hikers near U.S. Highway 93 between Dolan Springs and Hoover Dam Sept. 28.

Krista Gunnoe, a funeral arranger at Lietz-Fraze Funeral Home, said no unclaimed or unidentified bodies passed through her establishment in the last year.

Lietz-Fraze handled the arrangements for Arlica Dendy who was found murdered at the age of 29 near Radar Hill in August 2015.

She did receive a fair share of deceased through rotation calls – bodies of those with family members unfamiliar with funeral services, survivors who don’t care which mortuary handles the body, those who have no family in the vicinity that can be immediately contacted, or those with nobody to claim the body.

“It doesn’t always make them abandoned just because they’re on rotation,” Gunnoe said.

She had no immediate tally of rotation case bodies, but said all were identified and eventually claimed.

“I would call it pure luck,” Gunnoe said. “We’ve been lucky that everyone we’ve had on a rotation call had next of kin and we’ve been lucky enough to get them to (the family).”

Both funeral homes have to wait 30 days before filing the paperwork with the county to authorize a cremation.

Mohave County has plots at Mountain View Cemetery specifically for the burial of John and Jane Does.

Ray Aldridge, broker for the cemetery, occasionally handles those cases, but said the county does most of the work.

“The only thing I do is the burials,” he said. “They will call and say to open up a grave.”

According to cemetery records, there are around 30 unclaimed and unidentified bodies in the county plots. With the exception of the law, no one has ever come looking to tie up loose ends.

“I’ve had some inquiries from law enforcement over the years about where someone was buried,” Aldridge said. “Maybe to try to locate a missing person.”

The Kingman Police Department and Mohave County Sheriff’s Office use the same methods for identifying the deceased and notifying family or other survivors.

Identification is made by witnesses at the scene of death or verified by a driver’s license or other form of picture identification. If there is no immediate witnesses or identification or if the body is decomposed or otherwise unrecognizable, it would be turned over to the county medical examiner, who would determine identity with fingerprints, dental records or DNA.

Next of kin are notified in person if they are local.

“Officers are provided basic training in this area,” said KPD Deputy Chief Rusty Cooper. “We often bring along crisis advocates to help with emotional support for the surviving family members.”

If the next of kin lives in another jurisdiction, a law enforcement official from that jurisdiction is requested to make the personal notification.

“If the relatives live outside this county, the medical examiner may be requested to make the notification,” said sheriff’s spokeswoman Trish Carter.

If next of kin cannot be found and there are no criminal or mysterious circumstances in need of an investigation, the responsibility of financial and property assets is turned over to the county fiduciary office. If there is a sizeable estate, a private fiduciary office will take over. If they won’t take the case, the county steps in and the body goes to a funeral home.

Zorn once scoured the online obituaries in a Texas newspaper and found that of a brother of an unclaimed Arizona client. She immediately contacted the family.

“I found three nieces who didn’t even know they had an uncle,” she said.

Even if Zorn does find family, there have been plenty of instances when they wanted nothing to do with the deceased.

“Even if they don’t want to do anything, at least I know the family knows,” she said.

Zorn is a genealogy enthusiast who does a ton of digging in order to find the family of the deceased. She didn’t want to give up too many secrets, but said Ancestry.com is just the first step. She has a ton of other tools at her disposal.

“It’s an interesting hobby,” she said. “It’s like a puzzle waiting for me to solve.”

Once a body is cremated, Zorn takes the urns to various locations in the desert to unceremoniously scatter the ashes.

‘Missing in America’ veterans' remains to get escort to Prescott cemetery
15 veterans get escort to final resting place Friday
We never knew her: Unidentified girl laid to rest in Kingman 3 years after her body was found
The final bill: Funeral planning eases a time of grief
Last wishes: People have made odd requests at the end