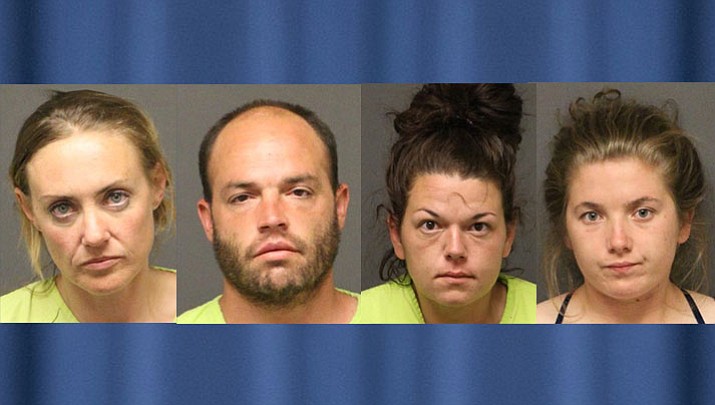 According to a sheriff’s spokeswoman, deputies conducted a traffic stop at Benton Street and Potter Avenue.

Deputies contacted Page, the driver, and a search of her purse reportedly revealed a container containing two different pills. Deputies determined one was identified as a dangerous drug and the other a prescription medication.

A search of Page allegedly revealed marijuana wrapped in paper. She was taken into custody without incident, transported and booked into the Mohave County jail. The vehicle was towed from the scene.

Rogers was arrested for burglary, possession of drug paraphernalia and a probation violation warrant issued by Pima County Superior Court, all felonies.

According to a sheriff’s spokeswoman, deputies were approached by a man in the parking lot of the Meadview Chamber of Commerce. The man said he saw two people inside his neighbor’s fifth-wheel trailer and a quad parked outside. The man also said the trailer was broken into a couple weeks ago.

Deputies responded to the property in the area of Glenwood Road and Sand Hill Lane and saw one person exit the trailer and continue walking at a fast pace and meet up with another person. Deputies continued to watch the people, later identified as Manore and Rogers, who were wearing black clothes.

Deputies eventually took both subjects into custody about two miles from the trailer in the area of Century Drive and Rainbow. A records check showed Manore and Rogers to have active warrants. A search of Manore allegedly revealed a plastic bag containing a crystal substance, a purple bottle containing marijuana and a pipe with residue. Rogers was allegedly found in possession of a glass pipe with residue.

Deputies contacted the owner of the property and trailer who wanted to press charges. Manore and Rogers were transported and booked into the Mohave County jail.

According to a sheriff’s spokeswoman, deputies responded to a welfare check at a residence in the 3800 block of Shaeffer Avenue. Deputies arrived and contacted Parsons, who was taken into custody without incident for the warrants.

She was transported and booked into the Mohave County Jail.