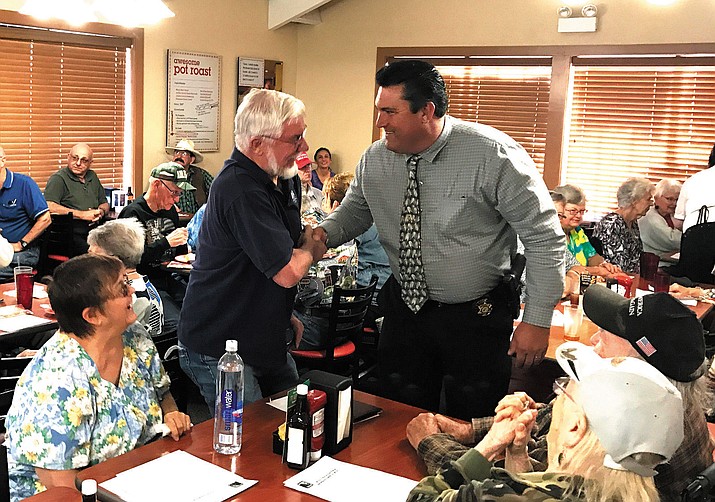 Schuster addressed issues regarding illegal immigration, drug use, texting and driving and even dodged a pass by one of his fervent supporters.

He started by thanking his supporters and reassuring the crowd that he’ll focus on serving the citizens of Mohave County.

“I didn’t come into this position with an ego,” he said. “It’s not about me, it’s about you, this county and the public.”

I want to make positive change and move our department, as small as it is, in the best direction we can go with the resources we have.”

Schuster gave a brief update on the status of MCSO.

There are less than 60 deputies patrolling more than 13,000 square-miles of the county. The department was down 18 positions when he took office. Twelve of those have been filled.

“If you need help, you need someone to get there in a reasonable time, and we’re not accomplishing that right now. There are some fixes that need to need to change but we’re doing well and moving forward.”

Schuster expressed excitement over the department’s volunteer programs that include boating safety, search and rescue and posse patrols.

“For those of you who do not know Mohave County, we rely heavily on volunteer support,” he said.

“When I came in, I decided I wanted to improve it,” Schuster said. He has reached out to a colleague and MCSO volunteer and tasked him with building a model to develop a better plan. Schuster said plans for a multi-leveled volunteer program are almost complete and he’ll begin reaching out to the public in May.

“If you’re interested, we need some help,” Schuster said.

He pointed out how he’s been improving customer service.

“The first thing I did coming in…was establish a mindset within the department,” Schuster said.

The low-paying, isolated working conditions have taken a toll on some deputies and Schuster wants to establish better deputy-resident relations.

“We are going to work with the good citizens of Mohave County to make our county great,” he said. “It’s a team effort. If we get involved we can fix things.”

Schuster didn’t overlook compression. He’s aware that the pay vs. experience irregularities will only hurt retention.

“The only true way to make our department grow and provide adequate service is to fix compression,” he said.

Schuster said it costs the county $100,000 to train a deputy. With 18 positions open or opening, the costs add up to $1.8 million, and the sheriff wants to make sure taxpayers get the best bang for their buck. Pairing with other law enforcement organizations is part of his proposed solution.

“Once we get on board with the agencies in the county, we’ll keep (deputies),” he said.

He opened up the floor to questions, the big one a topic too big for a quick answer – How will MCSO handle illegal immigrants, especially with the number of sanctuary cities increasing nationwide?

Forum member Robert Del Grosso asked how the department will work with Immigration and Customs Enforcement to transfer custody of detained illegal immigrants.

MCSO received a ruling from the Arizona County Insurance Pool, a claim and risk management protection firm, that MCSO is not to hold an illegal immigrant after a 48-hour detainer period. Recent changes to policies have made transferring custody more fluid.

“The way it works in reality is … if I arrest a person for shoplifting and I determine they may be here illegally, I immediately on-scene contact ICE,” Schuster said.

ICE will send a detainer request and a warrant, giving MCSO permission to hold an illegal immigrant for 48 hours until ICE can take custody.

Schuster gave a thumbs-down when asked what he thought of sanctuary cities, which was met by thunderous applause.

Sporting a “Schuster for Sheriff” T-shirt, mega-fan Karen Shiels of Kingman turned the serious tone around when she commended the sheriff and other agencies for the recent rash of drug busts.

“Since you’ve taken over, I’ve never been more proud to call you a Mohave County sheriff,” she said. “Does everyone here notice how many drug busts have been occurring because of you and your (staff)?”

“I am so tired of these stinking meth-heads,” Shiels added, along with a personal solution that stimulated some awkward glances across the room.

“Thank you for the sentiment,” Schuster replied. “I’m doing everything I can.”

The sheriff was the only local law enforcement officer present. Forum President Richard Basinger said he’s invited Kingman Police Chief Robert DeVries and other city officials to the May meeting.