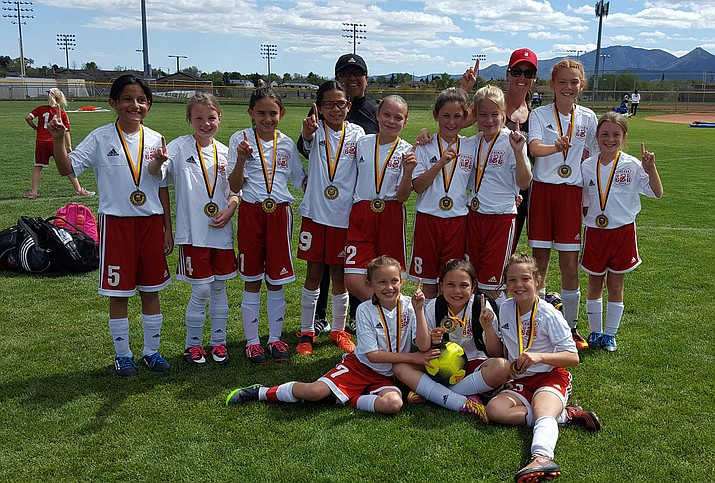 The Kingman G06 Girls team after winning the Yavapai Cup.

KINGMAN – The Kingman G06 girls entered the last tournament with a mediocre showing at the Ostrich Festival in Phoenix three weekends ago, finishing 1-1-1. The girls were excited about the games, but at the same time, they knew this would be the last game of their season.

Kingman’s first game was against Arizona Soccer Club’s “Thunder,” ranked No. 37 in the state. The girls were caught off-guard by the speed of the Thunder’s center forward. In the end, the Thunder defeated Kingman 7-2.

Kingman made some adjustments thwough, and in the second game of the day they beat the No. 40-ranked Arsenal, 4-2, and on Sunday, Kingman defeated No. 42-ranked SASC Cardinals of Tucson. The win secured a spot in the championship game where Kingman got a rematch with the Thunder, who had won all three of their games.

After trailing 4-0 at halftime, Kingman scored five goals to send the match into overtime. After battling the Thunder for nine minutes in extra time, Daniela Cardenas found the net to give Kingman the championship and Yavapai Cup.

Berlynn Bratley and Sophie Fottrell each had two goals. Kingman finished the season 15-5-2.