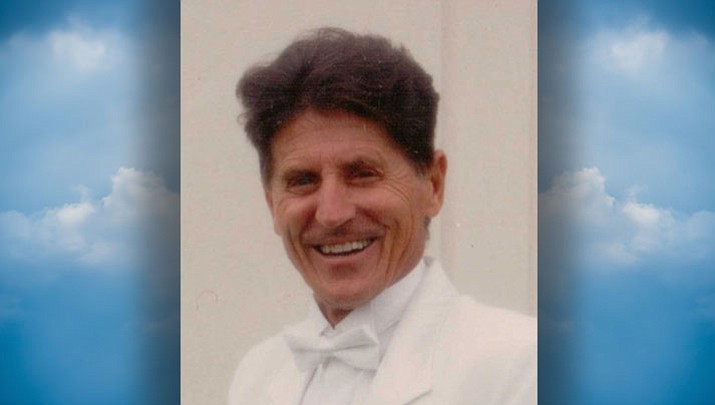 William Chowhan, 85 years old and a resident of Kingman, Arizona for the past 22 years, died peacefully on Good Friday. Memorial services will be held at 11a.m. on Saturday, April 29 in the LDS Chapel at 3180 Rutherford Road. Arrangements are under the direction of the Sutton Funeral Home.

Bill, as he was known, is the son of John and Dora [Fudyk] Chowhan, both of Ukrainian decent. He was the youngest of five children; Anne, Stella, Harry and his twin, Helen.

He was united in marriage to Barbarann Pearce October 15, 1956, in Toronto. To this union came three children; Wendi, Marc, and they adopted Brent.

After the loss of Barbarann in 1988, he remained single until he met Jean Sparks. They were married September 4, 1993 in San Diego, California. They adopted one son, Joseph, and Jean brought three sons into their marriage; Ray, Lonny and David. Bill was the type of man who loved all the children equally.

After high school, Bill attended Ryerson Trade Tech, and then worked 10 years for the Canadian National Telegraph, before moving to New York City in 1964 to work for Western Union. He transferred to California in 1968. He retired from Western Union after 25 years and then became a bus driver for special education children. In December 1994, he and Jean retired and moved to Kingman, Arizona, in January 1995.

Bill was a gentleman, a friend to all, helpful and caring. He served actively in his church, the Church of Jesus Christ of Later Day Saints, serving eight missions for the Lord, with his wife, Jean.

Bill was also preceded in death by his son, Marc, who died at age 2 ½; his mother, Dora; his father, John; and more recently, his sisters, Anne and Stella.

He is survived by his brother, Harry, sister, Helen, sisters-in-law, Sunny Webb, Debbie Ogden, Karen Brown, brother-in-law, Mike McKibben, and father-in-law, Manly Maedel. He is also survived by his wife, Jean, and his children; Wendi and Roddy Kartchner, Brent Chowhan, Joseph and Christy Chowhan, his step-sons, Ray and Regina Hedgecock, Lonny Hedgecock and fiancée, Misti, David and Saki Hedgecock, and ten grandchildren, two great-granddaughters, and several nieces and nephews in Canada as well as state side.

In lieu of flowers, please give a donation to your church or favorite charity in memory of Bill.