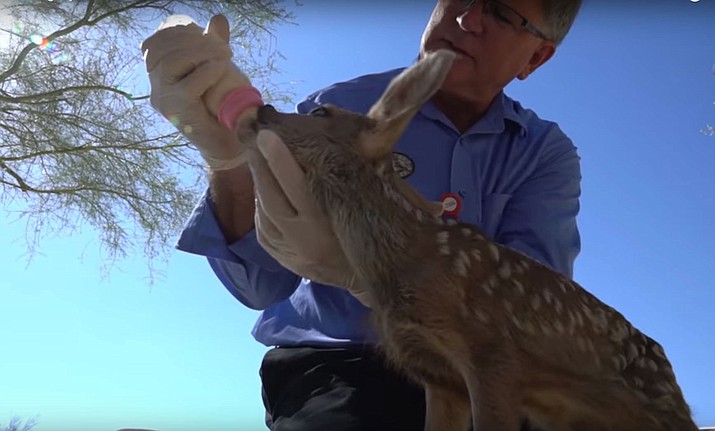 This unnamed fawn, being fed by Mike Demlong, will eventually be transferred to Keepers of the Wild Nature Park.

Deer Fawn Illegally Removed From the Wild by Arizona GameAndFish

PHOENIX – An approximately three-day-old deer fawn “kidnapped” from the wild near Salome will now be forced to a life in captivity.

“This truly is an unfortunate situation for this deer fawn. Instead of living a life in the wild, it must now remain in captivity due to the irresponsible actions of one person,” said Mike Demlong, AZGFD Wildlife Education program manager. “The fawn is healthy, but requires feeding every three to four hours, which is time consuming and costly in the long run. The department will keep the fawn for a few days to ensure it is healthy and feeding well, then it will be transferred to a wildlife sanctuary in Arizona.”

The fawn will eventually be transferred to Keepers of the Wild Nature Park near Kingman.

The public is also invited to help name the fawn by visiting the AZGFD Facebook at www.facebook.com/azgafd page by leaving a comment or on Instagram @azgfd.

To help defray rising costs of caring for Arizona’s wildlife, AZGFD recently began its “Be a Hero for Wildlife” donation campaign to give the public an opportunity to support its efforts to treat sick, injured, orphaned and confiscated wildlife by texting CRITTER to 41444 from any smartphone.

“Unfortunately, the department does not receive any state general fund dollars, including funds to provide long-term care for captive wildlife. That’s what makes donations that much more important,” Demlong said.

Funding raised through the “Be a Hero for Wildlife” text-campaign will be used to care for the sick, injured, orphaned and confiscated animals housed at the Wildlife Center, in addition to the many nonreleaseable animal ambassadors – such as a great-horned owl, golden eagle, desert tortoises and prairie dogs – that are used in educational outreach statewide.

In addition to donations, the public can also help keep wildlife wild by leaving baby wildlife alone. Young wildlife is rarely abandoned so there is often little reason to “rescue it.” One or both of its parents is likely nearby searching for food and will return.

Baby birds and bunnies are the most common wildlife species misguidedly removed from the wild by the public. Young birds that have fallen from the nest can be placed back in the nest or as close as possible. Baby birds that are partially flighted should be left alone or moved nearby out of harm’s way.