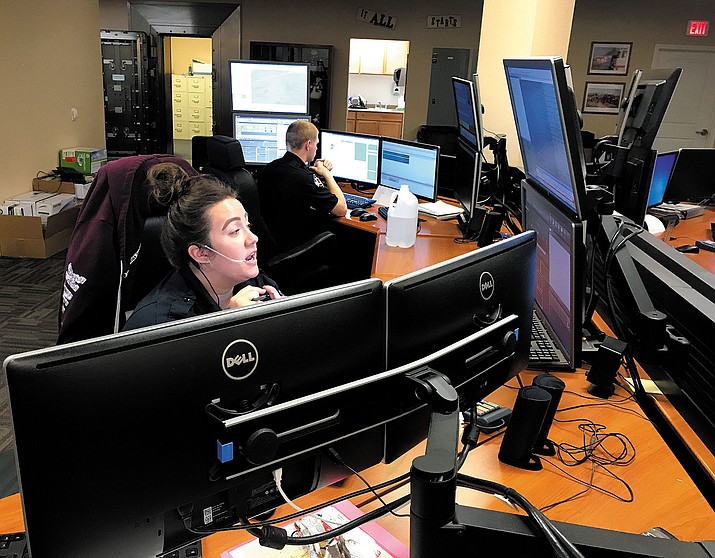 Communication Center Manager Deann MacLeod and Kingman Fire Chief Jake Rhoades want the public to know they have the 911 game under control. The dispatch center – tasked with handling calls within city limits – takes an average of 2,500 calls a month. The staff of 16 dispatchers is trained to interpret the nature of the calls and notify the appropriate responding agency.

They estimate about 25 percent of non-emergency calls to dispatch are calls that people don’t think are serious, but really are. They can include chest pains, shortness of breath or even a vehicle theft.

“A lot of times people will call and say ‘I don’t know if this is an emergency, but …,’” MacLeod said. “We treat every situation as though it’s an emergency until we can prove otherwise.”

Dispatch has a minimum of two communication specialists taking calls at any given time. There is no administrator who can handle the weird or non-emergency calls specifically, so all dispatchers must be professional and treat every 911 call as an actual emergency. To counter complaints or lawsuits, you’re on tape – or in a databank to be more accurate.

They’ve had their spurts of weird and random calls. People call 911 to ask directions, what’s going on downtown, and when the power might be back on after a storm, to name a few. Dispatchers also get a large number of pocket dials.

MacLeod had no shortage of incidents involving parents giving their children old cellphones to play with. Although the phone may not have a service provider, if it still has power and is turned on, it can still dial 911. Wrong dial or not, police will still have to make an appearance.

“We have to send a unit to the site of the call, if they can find it,” MacLeod said.

The County and Then Some

The Mohave County Sheriff’s Office dispatch center on West Beale Street is the only sheriff’s dispatch in the county, and its jurisdiction is basically a huge checkerboard.

Depending on the location and the nature of the 911 call, Dispatch Supervisor Jody Schanaman and her 16 dispatchers are ready to alert not only Mohave County sheriff’s deputies, but those of neighboring counties in Arizona, California, Nevada and Utah. They also delegate calls to local police and fire departments, Fort Mojave and Hualapai tribal police, Arizona Department of Public Safety, Bureau of Land Management and the National Park Service.

“We have to have that interconnection between agencies,” Schanaman said.

“MCSO is unique in the fact that we get almost all 911 cellphone calls not in the city jurisdictions,” Schanaman said. “We have to triage them.”

For example, if a call is a medical or fire issue, then only medical or fire agencies will respond. In the event of a car crash or crime involving injuries, medical and law enforcement will be dispatched. It’s those crashes and fires that tend to gum up emergency lines. Spectators and witnesses will flood the switchboard, and as with KPD, MCSO acts with professionalism.

Those types of mass queries lead to busy signals. KPD dispatch acts as a back-up for MCSO. If both agencies’ lines are flooded, you will get a busy signal.

MCSO also gets a large number of pocket dials, often accidents, sometimes suspicious. Dispatchers once helped nab a domestic violence suspect by paying extra attention to what started out as a perceived pocket dial.

“We could hear ‘get your hands off me’ type remarks in the background,” she said. Dispatchers passed the signal’s location to deputies, who pulled over and arrested the suspect. “We have to ask ourselves ‘is it just a pocket dial, or is something really going on?”

But who makes the non-emergency emergency calls? MCSO gets all types. People with pre-paid cellphones will call, say they’re out of minutes and ask to be transferred to another number.

Children frightened of the boogey-man – and afraid to wake their parents – will dial 911.

“They’ve been taught to call 911 when they’re frightened,” she added.

“We’ll take the call as a public service, but we’ll give them that number and remind them to call 911 only in emergencies,” Schanaman said.

Don’t be Afraid of Mistakes

Unless you’re intentionally being a jerk, there’s nothing to worry about when calling 911. Both KPD and MCSO dispatchers are trained to be professional, but also trained to not take abuse.

Arizona statues state that using a phone to intimidate, threaten or harass people or falsely reporting emergencies, are misdemeanors punishable by fines and/or jail time. Subsequent false reports are considered a felony.

Almost all calls are traceable. Landlines can be pinpointed and cellphones traced within meters of their location – even in urban areas. The Kingman dispatch center falls under control of Kingman Fire Department, not Kingman Police, but that doesn’t mean KPD won’t get involved if necessary.

“If a call escalates into something more than the common call, we’ll send an officer to handle it,” MacLeod said.

Living in the boonies doesn’t make you invulnerable.

“We’ll simply say ‘a deputy has been appraised of the situation and is on his way out,’” Schanaman said. “Most of the time alcohol and drugs are involved and people are just being belligerent.”

Callers may be scared or even confused on whether or not to call 911.

“If you think it’s an emergency, call us,” MacLeod said. “The most we’ll do is tell you to call the non-emergency number next time.”

Schanaman deals with plenty of lost travelers and tourists, and finding them in an emergency can be difficult if they don’t know where they are.

“We want people to keep an eye on landmarks and mile markers when they’re traveling,” she said. “Know your surroundings. Those are the little things that help us out.”

Public education is the key, and Rhoades insists dispatchers have the job down.

“They have all the resources, and they’re the key holders,” he said. “They know the system and the resources we have.”