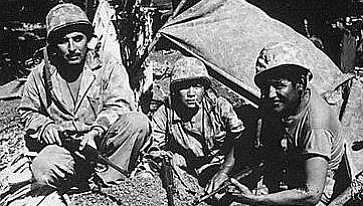 WINDOW ROCK (AP) – The Navajo Nation Council has honored the Navajo Code Talkers, who used the tribe's language to outsmart the Japanese in World War II.

The U.S. Marine Corps laid a wreath at the park and honored code talkers who have died with a 21-gun salute.

In a statement, U.S. Sen. John McCain of Arizona said "history will forever marvel at the Navajos who used their native language during their service in the U.S. Marine Corps to develop an unbreakable code that contributed significantly to Allied victories at Iwo Jima and across the Pacific."