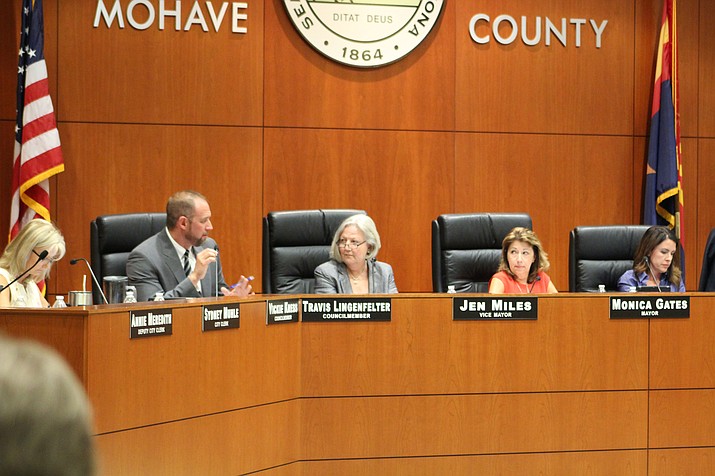 KINGMAN – After a lengthy debate with statements from the public and among the Kingman City Council, a funding mechanism for two Interstate 40 interchanges – Kingman Crossing and Rancho Santa Fe Parkway – was approved Tuesday by the council.

The current rate is 2.5 percent, but 0.5 of it was scheduled to sunset at the end of the year. Council unanimously retired the sunset clause, which made permanent the rate at 2.5 percent. The 0.5 percent permanent addition was designated for pavement preservation.

The lengthy debate centered on whether the city should put in place a funding mechanism for the two projects and increase the TPT another point to 3.5 percent.

Kingman Regional Medical Center had a tentative proposal on the table for Kingman Crossing. KRMC offered to build the interchange, and in exchange would purchase the city-owned land on the south side of I-40, partner with the city in regards to the land that would provide excise tax relief to KRMC, and KRMC would benefit from a sharing agreement on future sales tax dollars.

“A lot of our stakeholders are excited about two interchanges,” Miles said. “Rattlesnake Wash/Rancho Santa Fe Parkway are not new ideas. The area of impact is large, and this is a moment in time for us to consider (both). We have a synergistic opportunity, and ADOT (Arizona Department of Transportation) supports it. That was a game-changer for me.”

Jim Baker, treasurer of KRMC’s Board of Directors, presented a letter written to the council by CEO Brian Turney. KRMC does not feel enough analysis had been done for the council to move ahead with a funding mechanism for both projects.

“… KRMC is fully supportive of your efforts to move Kingman economically forward,” Baker read to council. “If you elect to raise taxes, rather than consider our plan for Kingman Crossing, you will continue to find us a cooperative partner to explore how it might be structured. If you elect to raise taxes to fund both interchange projects concurrently without analysis showing the proper incremental return to the city, we will not be contributors to the project.”

Miles said she was disturbed that KRMC would take such a position, and she was inclined to move toward two projects because she didn’t want the future of Kingman to be solely dependent upon sales tax revenue. As proposed, the Rancho Santa Fe Parkway project is conceived as being an industrial business interchange.

“Think how great Kingman could be if we have 2,000 to 2,400 living-wage jobs,” Lingenfelter said. “I appreciate KRMC. If there is such a thing as a free interchange, I would love to see it.

That comes after two subcommittees, one dedicated to Kingman Crossing and the other to Rancho Santa Fe Parkway, bring their presentations to the full council Sept. 5.