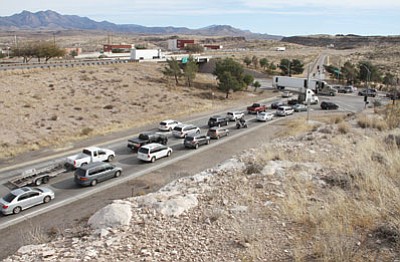 Traffic along the junction of I-40 (foreground and background) and U.S. 93 (on right) on a Friday afternoon. The proposed Interstate 11 would include a stretch of both roadways.

KINGMAN – Civil engineers and designers working on Interstate 11 continue to seek public comment and alternative selections on the massive highway project that would link Mexico to Canada with an international trade corridor passing through Kingman.

In May, Arizona Department of Transportation and the Federal Highway Administration conducted the second round of public outreach for the environmental study on Interstate 11.

Public meetings were held in Tucson, Marana, Nogales, Casa Grande, Wickenburg and Buckeye. More than 600 people attended the meetings, and more than 2,300 comments were taken.

The public outreach process supports the alternatives analysis for the I-11 study and helps determine a reasonable range of alternatives to carry into the Tier 1 Environmental Impact Study, or EIS.

The May meetings were held to solicit input on the “universe of alternatives” being developed. This includes alternatives that the study team recommended for elimination and those still under consideration.

The proposed route will connect Interstate 40 to U.S. 93 at Clack Canyon, running behind existing homes and businesses and hooking up with U.S. 93 near Coyote Pass.

Placing the roadway behind the hills at Clack Canyon reduces residential and visual impact, and removes a majority of traffic from Beale Street, ADOT assistant engineer Chris Olson told the Daily Miner in 2015.

Seventeen construction projects related to I-11 have been completed by ADOT since 1998, and nine projects remain.

Meanwhile, the first 2.5-mile stretch of Interstate 11 opened Aug. 8 between Henderson and Boulder City, Nevada. It’s a small step toward completing the first 15-mile leg of the highway that’s been in the design stages for more than 20 years.

“This new and improved Interstate 11 going through Kingman and its intersection with I-40 can bring nothing but growth and spendable business dollars to our area,” said Mike Wagner, real estate agent with ReMax Prestige in Kingman. “Look anywhere in the country where two major interstates intersect and you have development … economic development. Isn’t that just what we need?”

The next round of public input comes in the summer of 2018, following the release of the Environmental Impact Report. This will include formal public hearings.

Check the I-11 study web site at I-11Study.com/Arizona for regular updates from the study team and upcoming activities. All meeting materials are currently posted on the website under the Community Outreach and Public Meetings tabs.