War of words heats up as Ward touts Trump tweet 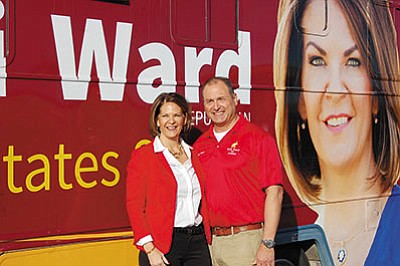 Kelli Ward has stepped up her criticism of U.S. Sen. Jeff Flake after receiving an endorsement from President Donald Trump.

Ward announced her intention to challenge Flake in 2018, most recently criticizing the senator’s opposition to Trump policies, including the rejection of Muslim immigrants into the U.S. and the president’s policies on border issues.

According to Ward, her 2018 opponent has offered only obstruction to Trump’s goals and a half-hearted effort to serve the conservative interests of Arizonans.

“He’s weak on immigration,” Ward said. “He’s weak on the border. He wants to reward people who are here illegally, and continue his ‘Gang of Eight’ policy of amnesty. I think it’s appalling that one-fifteenth of the people who immigrate to the U.S. come without work skills. Flake has excused gang members, prostitutes and even people who have previously been deported. We need law and order. We need to stop the madness on our border, and Flake is too weak to do that.”

Trump on Thursday extended his support to Ward via Twitter: “Great to see that Dr. Kelli Ward is running against Flake. Jeff Flake, who is WEAK on borders, crime and a non-factor in Senate. He’s toxic!”

“My phone started ringing at about 4 a.m. (Thursday),” Ward said. “People told me that Trump was giving me his support, and in the nicest way possible. I look forward to getting to Washington and working with him to repeal Obamacare, stop illegal immigration, fix the tax codes, fix the VA.; and to ensure that we have the strongest military in the world so that we can truly accomplish peace through strength.”

Ward has long been a proponent of President Trump, who she believes will have the strength to fulfill the political desires of the Republican base.

“I hope that the people who supported Trump will support me, so that we can continue to make America great again,” Ward said Friday afternoon.

According to Ward, a former Arizona State Senator, a term in the U.S. Senate would provide Havasu residents, as well as all of Arizona, an “open door” to their representative. Ward said she would be ready and willing to hear the needs and interests of Arizonans, and aid them in Congress.

“They’ll be able to reach out to the person who’s representing them,” Ward said. “Flake has, for Arizonans, been incredibly hard to reach.”

As to how well Trump’s endorsement may aid Ward’s 2018 campaign, the candidate was optimistic. “I think any Republican would love to have the support of a sitting president,” Ward said. “When Flake bets against the president, he’s betting against America.”

Flake’s office replied Friday afternoon to Ward’s statements. “Senator Flake is dedicated to serving all Arizonans. He and his staff have gone to great lengths to ensure that all Arizona voices are heard, and will continue to do so.”

Senator Flake, one of the bipartisan “Gang of Eight,” sought to reform immigration laws in 2013.

Since Flake’s 2012 inauguration into the U.S. Senate, the Senator has voted in favor of the STEM Jobs Act of 2012, which increased the number of employment-based immigrant visas for immigrants possessing a doctorate or master’s degree from a U.S.-Certified school, in a field encompassing science, technology, engineering or mathematics.

Flake also co-sponsored the Border Security, Economic Opportunity and Immigration Modernization Act of 2013, which allowed the Secretary of Homeland Security to allow “registered provisional immigrant” status to eligible immigrants, and to allow such immigrants to receive “lawful permanent resident” status to RPIs who had either been in the U.S. for at least five years, or were younger than 16 upon entry into the U.S.

The EOIM Act also increased the number of border patrol agents stationed at the U.S.-Mexican border and sought to strengthen security along the border.