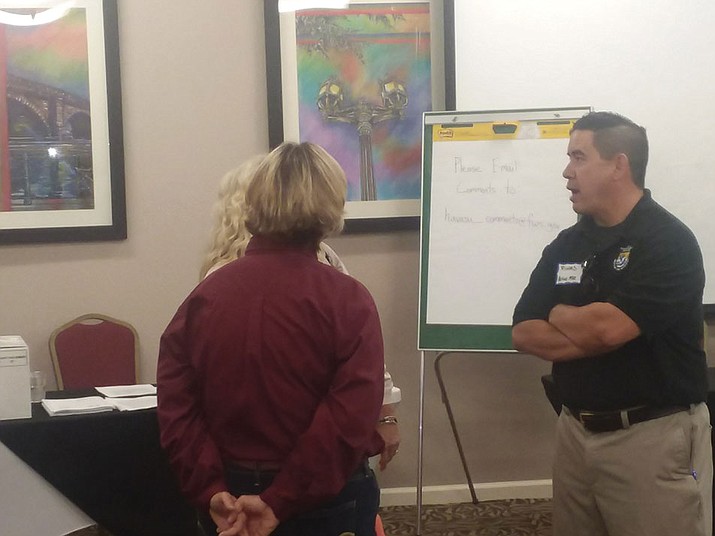 Richard Meyers (right) is the new manager for the Havasu National Wildlife Refuge, and he explains some of the proposals that the service is making to those who attended the open house sponsored by the USF&WS service in Lake Havasu. (DON MARTIN/For the Miner)

Last year, the U.S. Fish and Wildlife Service (USF&WS) proposed a lot of major changes on the management of the Colorado River, including the Topock Marsh, which is within the boundaries of the Havasu National Wildlife Refuge.

The proposals they made at that time infuriated a huge number of people, including pleasure boaters, anglers and even hunters, who utilize this stretch of the Colorado River all the way from the north end of Lake Havasu to the north end of the Topock Marsh.

Public meetings were held and the outcry was so huge – especially in Lake Havasu City – that it ultimately resulted in then manager Linda Miller getting transferred out, and the proposals dropped.

Even U.S. Representative Paul Gosar got into the fray and publicly chastised the USF&WS and its upper management for the proposals they made.

Now just over a year later, with a new refuge manager at the helm, the USF&WS is once more soliciting comments from the general public on some management changes they want to make regarding the Colorado River and Topock Marsh.

And this time it looks like the changes are way more reasonable and the call for heads to roll within that agency like it did last time may not happen.

On Thursday, the service held an informational open house in Lake Havasu from noon till 6 p.m. for the public to learn what the proposals are and how they may affect those who use the river and Topock Marsh.

Local resident Ryan Asplin and I made the trip to Havasu to seek out information on the proposals and meet the new manager, Richard Meyers, and his staff.

The new refuge manager is totally different from his predecessor. I found him to be personable and well spoken.

Meyers answered each and every question I asked of him in a straight forward manner. No “government double speak” from this guy, something I appreciate.

When I asked Meyers about changes being proposed, he gave me the information that I needed plus they had a handout which clearly identified the areas that are going to be affected.

As one who hunts waterfowl there and occasionally fishes in the marsh, I am very interested in the new proposals.

Here is a list of what is being proposed:

The new regulation will add the areas of Pintail Slough, Beal Lake, Lost Lake and Topock Bay to the list where personal watercraft will not be allowed.

2) Watercraft speed is limited to no-wake in all backwaters on the Colorado River on the Havasu NWR from the south to the north buoy line at the I-40 Bridge.

Proposed regulations will add the no-wake speed on the main channel of the river known as “Devil’s Elbow” and to the areas of the buoy marked areas south and north of the I-40 Bridge.

3) Water skiing, tubing, wakeboarding or other towed devices are currently prohibited within the waters of the Havasu NWR.

Add to that list that kiteboarding will now be a prohibited use, and add that Pintail Slough, Beal Lake, Lost Lake and Topock Bay are areas that will be closed to the above listed activities.

4) Currently the refuge prohibits the use of all air-thrust boats; air-cooled propulsion engines, and floating aircraft by the public for the purpose of hunting and fishing.

Under the proposed regulations, the wording “hunting and fishing” will be changed to say “any activity on all regulated waters under the refuge’s jurisdiction.” Also hovercraft and hydro-flight devices will be added to the list of prohibited watercraft. It will allow however, the use of air-cooled propulsion engines.

5) Designated portions of the Topock Marsh are closed to all entry during the waterfowl hunting seasons (including the State of Arizona junior waterfowl hunt) and from April 1 through August 31 during the spring/summer nesting season.

7) The refuge will prohibit entry of all motorized craft in the 60-acre Mesquite Bay area as indicated by refuge signs and buoys.

8) Boating activity and its associated effects will be monitored in all areas of the Havasu NWR, with regard to waterfowl, shorebirds, birds of prey, threatened and endangered species, other wildlife and their habitats, and the safety of all refuge visitors.

Meyers stated in the document that was passed out at the open house that he has reviewed the existing use of both motorized and non-motorized watercraft on the Havasu NWF and has determined that the use should continue because it supports wildlife-dependent recreational uses such as fishing, hunting, wildlife observation and wildlife photography.

The entire draft proposals can be found at www.fws.gov/refuge/havasu

You can also email comments to havasu_comments@fws.gov