Prep Football: Lee Williams is much stronger in 2017 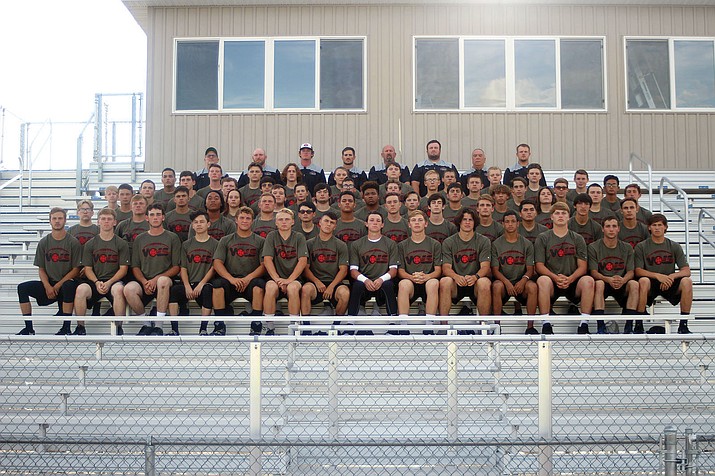 The Vols are entering their second season in the 4A Grand Canyon Region.

KINGMAN – At this point last year, the Lee Williams High School football team was entering the season under a new system.

The Vols aren’t facing that uncertainty anymore, as they now have a strong grasp entering Clint Sasse’s first season as head coach.

“Everything has been a lot more consistent,” Sasse said. “By now the kids have a good idea of what we as coaches expect of them. Therefore it makes it a ton easier.”

Lee Williams’ strong core of experienced returners helps this cause. While the Vols welcome back 10 starters on defense and seven on offense, Sasse mentioned that those numbers don’t really sum up the team.

“I’m not huge on the whole starter thing,” he said. “To me, starting is just who plays the first play. We’re getting guys in. We rotate in every couple of plays to stay fresh. … Significant playing time and experience means a lot more to me. We probably have 20-25 guys coming back that have seen significant varsity playing time.”

However, experience doesn’t always equal immediate results. Sasse knows there is one area that has taken time to develop.

“The offense always comes along a little bit slower,” he said. “Offense is all about timing. The snap has to be perfect. The handoff has to be perfect as well as blocking and execution. It’s all timing. Timing always develops in the later stages of camp. We’re not far away, but that would be one thing to work on.”

The Vols do have an advantage entering this season, as they’re a lot more familiar with their region opponents. Last season Sasse and his staff didn’t have the luxury of game film and expect that to make a difference.

“It’s definitely an advantage having a year under our belt in this conference and region,” Sasse said. “Seeing all these teams one time already is going to help a lot. It gives you a base idea of what they’re trying to do on offense, defense or special teams.”

Sasse added that he feels the team should have won a few more games in the 4A Grand Canyon region. The Vols finished 1-5 in the region, but have higher expectations this season.

“We’re looking to get back into it and execute,” Sasse said. “If we do that, we’ll get back at a lot of teams in the conference.”

While that’s the case for the games that count, Lee Williams is also looking forward to playing cross-town rivals Kingman Academy and Kingman.

“We want to battle for the city championship,” Sasse said. “We’ve won it the past two years and we look to do that again.”

At the end of the day, the Vols are focused on the fundamentals of the game. Sasse also knows if the team plays hard and plays physical, the sky is the limit.

“I have total faith in these guys,” he said. “We’re just as good as anybody we face, in my opinion. It’s just whether we execute or not. If we execute our fundamentals and have better conditioning than the other team, I think we’ll be fine.”