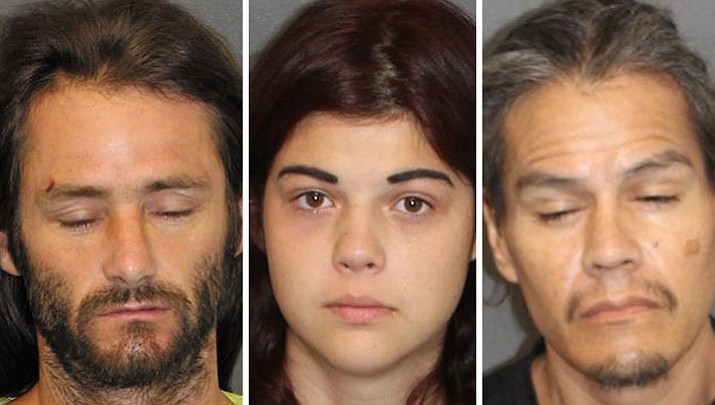 According to a sheriff’s spokeswoman, deputies knew Rucker to have an active warrant and contacted him outside a home in the 4400 block of North Baker Drive.

Rucker reportedly said he didn’t have a warrant because he took care of it. He allegedly resisted as the deputy was taking him into custody. After a brief struggle, he was restrained and taken into custody.

Rucker was transported and booked into the Mohave County jail without further incident.

On Aug. 18, Mohave County Sheriff’s deputies responded to a report at the Mohave County jail regarding an assault on a medical employee by an inmate.

According to a sheriff’s spokeswoman, deputies contacted the employee who said she was distributing medications to cells when inmate Terry James, 61, of Bullhead City, lunged at her and slapped the medication out of her hand as she was placing it into the chute of his cell.

Deputies contacted inmate James and charged him with aggravated assault on a health care professional, a felony.

Further investigations determined Elwood allegedly had possession of stolen items from multiple vehicle burglary reports in her bedroom.  Found were a GPS system, darts and a knife reported stolen July 20 in the 2800 block of Carver Avenue, a wallet reported stolen in the 3300 block of East El Tovar Avenue Feb. 5  and a stolen driver’s license from the Aug. 1 incident.

According to a sheriff’s spokeswoman, deputies knew Lashorne to have an active warrant when they recognized him driving a vehicle and conducted a traffic stop in the 2800 block of East Potter Avenue.

Deputies contacted Lashorne regarding his warrant where he was taken into custody without incident and booked into the Mohave County jail.

On Aug. 21, Kingman Police arrested Loren Dean Hasthepipe, 39, of Kingman on felony charges of possession of narcotic drugs, possession of drug paraphernalia and a failure to appear warrant.

According to a KPD spokesman, Hasthepipe was the passenger is a vehicle stopped for a traffic violation in the 2000 block of Airway Avenue.  During the stop, the officer discovered Hasthepipe had a felony warrant for his arrest, at which time he was allegedly found to be in possession of heroin and the assorted drug paraphernalia.

The vehicle’s driver was found to be operating with a suspended driver’s license, arrested and charged with misdemeanor offense and released. Hasthepipe was booked into the Mohave County jail.

On Aug. 24, Kingman Police arrested Fred Dann, 47, of Kingman for violation of his sex offender registration.

According to a police spokesman, Dann was contacted in the 3300 block of Harrison Street where officers discovered he had failed to give notice on an address, a requirement for registered sex offenders.

Dann was taken into custody and booked into the Mohave County jail.