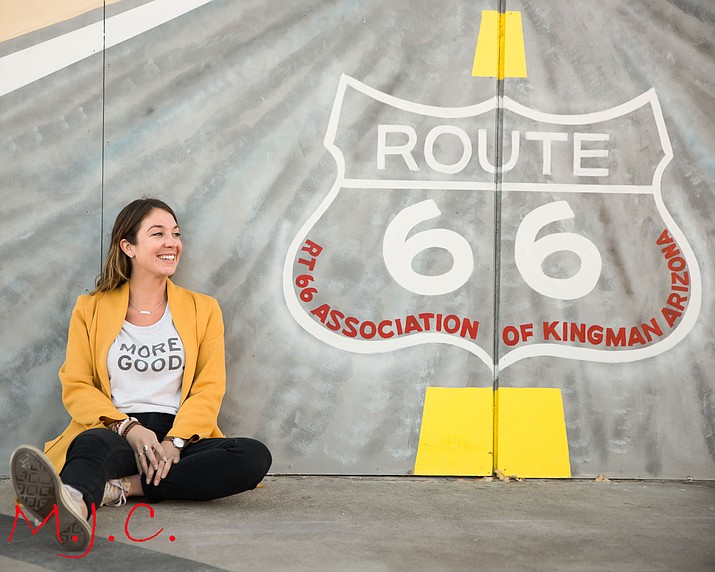 Mary Latham recently spent several weeks in Kingman as part of a protracted, but profoundly meaningful odyssey across America.

KINGMAN – Kingman has always been a waypoint for interstate motorists. A few weeks ago, Kingman played its historical role for a very unique traveler, Mary Latham. A resident of Long Island, New York, Latham recently spent several weeks in Kingman as part of a protracted, but profoundly meaningful odyssey across America.

Latham is the founder of “More Good” (www.moregood.today). This fascinating project will take her to every state in the U.S., as she endeavors to “collect stories of acts of human kindness and compile these stories into a book to donate to hospital waiting rooms.” The project is now over a year old and during that time Latham has visited 23 states, including Arizona, and stayed in over 70 American homes.

But don’t be misled by the hopeful tone of Latham’s project. There is nothing naïve about her endeavor. Its vitality springs from Latham’s sustained reflection on grief and loss, coupled with her steely persistence to make a point: This world bears witness to profound evil. And yet, she claims, there is “more good.”

More Good is the offspring of suffering. December 2012 saw one of the most horrific mass shootings in American history: Sandy Hook Elementary School. Latham was overwhelmed by this event.

“I couldn’t stop focusing on it and thinking about the young girl I was to babysit that evening, scared I’d spend the whole time just crying,” Latham said.

At this very moment, Latham’s mother interrupted her despair, urging her not lose of site of human kindness:

“There’s always going to be more good,” her mother told her. “You just have to look for it.”

The compounding tragedies of her mother’s death and Sandy Hook set Latham on a course to find and highlight stories of human kindness. She took her mother’s words seriously – “you just have to look for it.” And look she did.

“I didn’t want to sit around waiting for the stories to come in anymore. I wanted to go and search them out myself,” Latham said. “I wanted to get to meet the people whose lives were touched, maybe even changed, by kindness and compassion. I wanted to listen to their stories, compile them, share them. Maybe their stories of hope could provide healing for others like they had for me. In a world overrun with negative news, I wanted to create one more outlet to remind us that there is, in fact, more good.”

More Good is driven by a fascinating and compelling assumption: Human beings are comforted and transformed by stories. Recall that Latham’s project is not merely about collecting personal narratives; it is, more significantly, about creating a book “to donate to hospital waiting rooms.” Latham is trying to conduct a chorus of voices that will accompany people in suffering, much as Mary’s mother accompanied her during the fateful days of Sandy Hook.

Latham’s mother lives on through the project in other ways, and most especially in Latham’s chosen mode of transportation. From sea to shining sea, Latham drives her mother’s blue Subaru. Now clad with the stickers of states she’s visited, Latham’s car is a concrete reminder that her mother accompanies her – every day, every mile, every state.

More Good is in no way partisan, but it is political – fiercely political. More Good embodies a form of empathy that is rare at this cynical moment in American “civil” discourse. The project is strangely foreign, attractively authentic, and profoundly necessary. Through the careful curation of stories, Latham calls us to a better, more productive politics – a politics that transgresses the boundaries between red and blue, that enters the homes of Trump supporters and Clinton supporters, and lends an attentive ear to those who stand and to those who kneel.