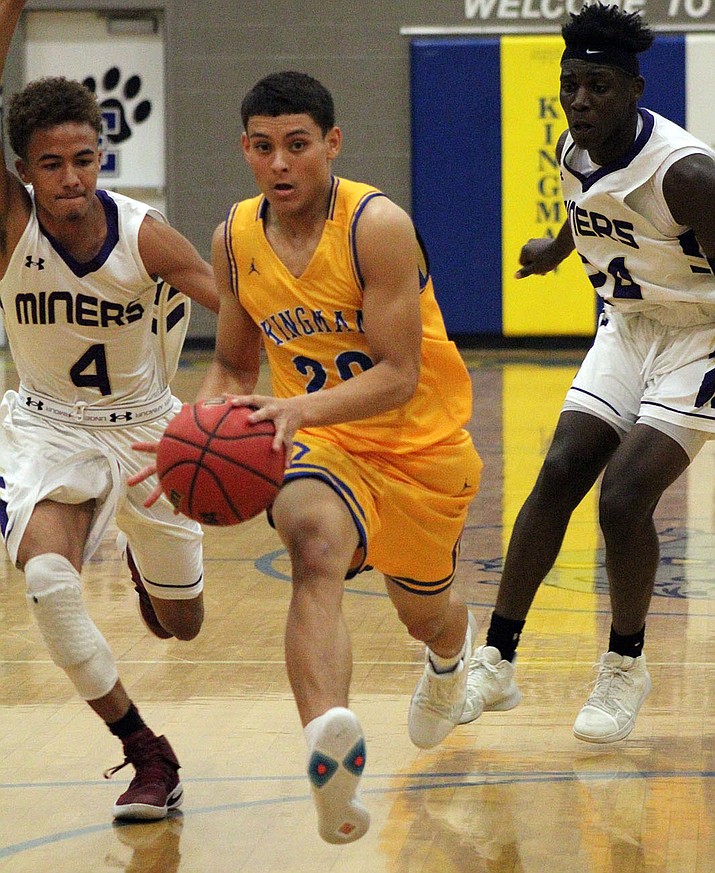 Kingman’s Elijah Howery tallied 16 points in a 71-66 loss to Nevada’s Sunrise Mountain on Friday at the Bulldog Classic.

KINGMAN – With the Kingman High School boys basketball team facing a 16-point deficit entering the fourth quarter, head coach Nick Juby could have easily turned to the bench. But Juby instead let the Bulldogs battle and they almost pulled off the comeback win Friday before falling to Sunrise Mountain 71-66 in the Bulldog Classic.

“We played way more together in that fourth quarter,” Juby said. “That’s the tough thing. We’ve played seven games, but it’s still pretty early in the season. We’re still learning and figuring things out. We’ll get there. I have full faith that we’re going to get there.”

Kingman definitely showed signs of growth in the fourth quarter as they used an 11-0 run to inch within seven points, 60-53, with 4:20 remaining in the game. The Miners momentarily stopped the scoring onslaught, before the Bulldogs put together another 11-0 run to cut the deficit to three points, 67-64, with 1:01 on the clock.

That was as close as Kingman could get though, as Sunrise Mountain held on for the win.

“You have to hit your free throws and they were able to hit them,” Juby said. “We had a lot of missed shots and shots that bounced around the rim.”

A five-point third quarter also didn’t help the Bulldogs and Juby was well aware of it.

There was still a bright spot in the loss as reserve Tucker Humble lead Kingman with 17 points, while Elijah Howery scored 16 and Tobias Bagby added 14 points.

“Humble is coming along really well,” Juby said. “He just has a really good knack of finding the spot to go to when the guy drives. He has a ‘nose for the ball’ like a football player who always seems to be in on plays. He’s always there.”

However, it was Sunrise Mountain’s Steve Adeyemi that stole the show Friday with a game-high 25 points, highlighted by 20 in the first half.

“Sunrise Mountain is a good team,” Juby said. “They have a lot of length, a lot of size. Adeyemi is pretty good. He can play. I bet he plays at the next level. That’s a college-level player.”

The Bulldogs, who defeated Laughlin 76-62 later in the evening, return to the court Friday for 7 p.m. contest at rival Lee Williams High.