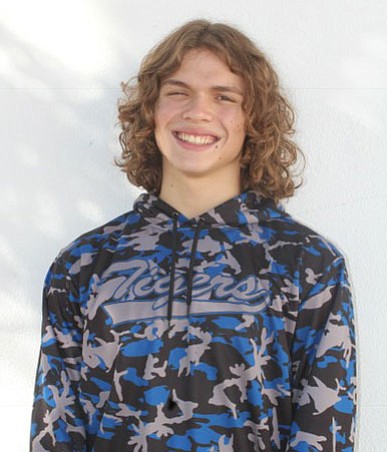 Logan Day was selected as the Student Rotarian from the Kingman Academy of Learning during the month of October. Logan was selected because of his academic excellence, leadership and dedication to the Kingman community.

He is the son of Dawn Day and will graduate from KAOL in May 2018. He is currently ranked first in his class.

Logan has received the perfect attendance award from 2014, 2015 and 2016. During those three years he was also on the KAOL high honor roll. Currently, he is a member of the National Honor Society.

Logan not only excels in the classroom, but also on the court. One of his highlights of his basketball career was playing on the varsity team in 2016 during the Tigers playoff run. He also has played travel basketball for 3 years with the Colorado River Voltage team. Logan was selected in 2015 for the National Basketball Camp International Basketball team and played in London for two weeks.

Logan has shown his leadership skills through his extracurricular involvement outside the classroom. He earned his Eagle Scout award in 2017. He has served on student council all four years of his high school career. Logan is also a KAOL renaissance member. During the summer break, he volunteers for basketball recreation camps at Kingman Middle School and Lee Williams High School.

Logan will be attending the University of Arizona and majoring in bio-chemical engineering. The Kingman Rotary Club is proud to have Logan Day as their student Rotarian. The club wishes him the best success in the classroom and on the court.