Veterans at Sea looking to help another hurricane ravaged area 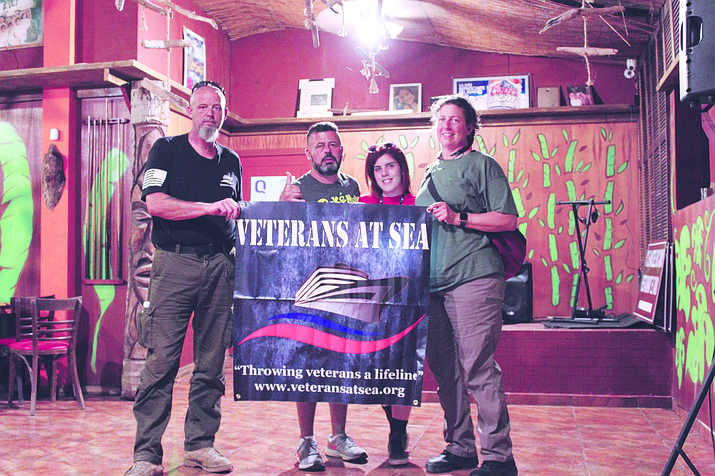 What’s left of a ceiling fan hangs down in a home damaged by Hurricane Maria.

KINGMAN – A local nonprofit veterans group that helped with Hurricane Harvey recovery efforts in Texas is shifting aid for people in Puerto Rico affected by Hurricanes Irma and Maria.

While waiting for holiday season to wind down, Veterans at Sea is gearing up to launch Operation Boots on Ground – Puerto Rico, a major recovery mission, beginning Jan. 15 in Lares, Puerto Rico.

A group of veterans from Kingman and throughout the continental Unites States will provide the Municipio of Lares and surrounding small communities with solar power, water filtration systems, tarps for roofs as well as providing basic needs such as nonperishable food, hygiene items, cleaning supplies and clothes.

After spending a week on the island, Veterans at Sea CEO Charles Black saw first- hand the hurricane’s devastation and lack of recovery efforts in the interior areas of Puerto Rico.

“I would drive through towns in the evening and not see any lights,” Black said. “The lack of power on the island is unbelievable. What hits harder is you talk to residents and they’re drinking water from anywhere they can find it. This has led to many people getting sick from drinking contaminated water.”

According to statusPR, a website tracking the recovery efforts, 95 percent of the island has access to running water and 70 percent has power.

“This may be true if you look at the number of power stations up and running and water distribution plants back in operation,” Black said. “But the entire island is still under a (water) boil advisory.”

Black described some of the damage.

“We saw water distribution boxes that were broken and had worms living in them, power lines up and running along the main roads, but no power going to the houses or smaller communities off these main roads,” he said.

To see view the status of food, fuel, water and power in Puerto Rico, visit statusPR at http://status.pr/?lng=en.

Veterans at Sea volunteers will be operating in areas still affected by the two storms – Hurricane’s Irma and Marina.

Most of these homes have not had power or water since Irma made landfall at the beginning of September before Hurricane Maria followed up and devastated the island.

Black has set up a headquarters at a restaurant in Lares. Donations can be mailed or shipped directly there.

Small packages in U.S. Postal Service Priority Mail boxes can be sent to:

Larger items can be shipped UPS to:

Monetary donations can be made at:

Veterans at Sea has also launched a Facebook fundraiser and YouCaring page to raise the money for team expenses and operations on the island:

The “We Stand With Puerto Rico – Grunt Style” shirt. Veterans at Sea has teamed will Grunt Style and will receive a portion of proceeds to support their Puerto Rico mission.

The local group has teamed with veteran-owned T-shirt company Grunt Style to release a “We Stand With Puerto Rico – Grunt Style” shirt. Veterans at Sea will receive a portion of proceeds to support their Puerto Rico mission.

The shirt and many others are available at www.gruntstyle.com/collections/products/veterans-at-sea-puerto-rico.

The Veterans at Sea mission is to provide a holistic and alternative solution to the mental health issues, addiction and chronic pain that have produced challenging lives for veterans, their spouses/caregivers and their children.