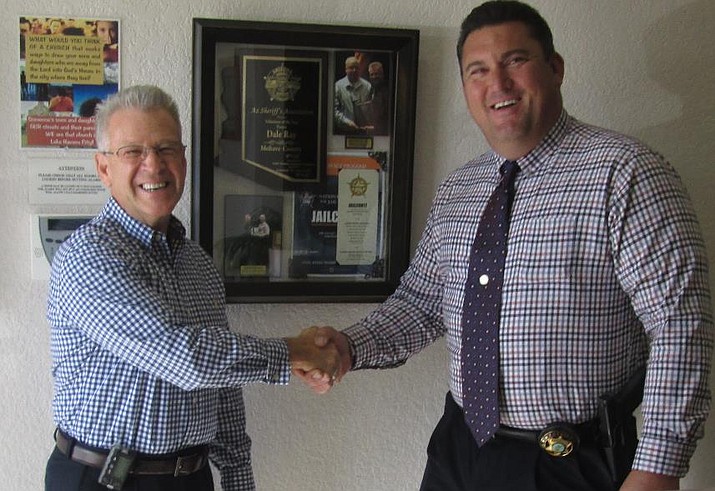 KINGMAN – The Arizona Sheriff’s Association recognized Pastor Dale Ray as the 2017 recipient of the Volunteer of the Year Award.

Pastor Ray was initially recognized for his accomplishments at the 2017 awards luncheon during the National Institute of Jail Operations training conference held in Scottsdale earlier this year. The Volunteer of the Year criteria describes an eligible candidate as a member of a volunteer organization or unit who has supported the sheriff’s office jail functions and who has clearly exhibited exemplary professional performance in support of the office goals during the previous year.

Pastor Ray of Lakeview Community Church in Lake Havasu City serves as a chaplain for the Mohave County facility and has been instrumental in keeping the religious programs running and constantly improving.

“Pastor Dale Ray was instrumental in establishing our volunteer chaplain program many years ago,” said Mohave County Sheriff Doug Schuster, “and I’m extremely thankful that he has remained loyal to the program and the inmates for all these years.”

“We are proud of all our chaplains and have a need for even more,” said Captain Don Bischoff. “We can use assistance in a number of support service functions in all areas of the jail operation.”

Bischoff added that many duties do not involve direct inmate contact or interaction. Schuster encourages citizens to volunteer their time and talents with the sheriff’s posse. Those interested can call the sheriff’s office at 928-753-0753 or pick up an application at any sheriff’s office location in Kingman, Bullhead City, or Lake Havasu City.

Each year the Arizona Sheriff’s Association recognizes the efforts of those working in Arizona’s county jails. The awards process involves nominations being collected from all 15 county detention centers, then being evaluated and reviewed by the Arizona Jail Commanders Awards sub-committee, which then finalizes a ballot. The award recipients are then selected by a vote of all 15 Arizona jail commanders.