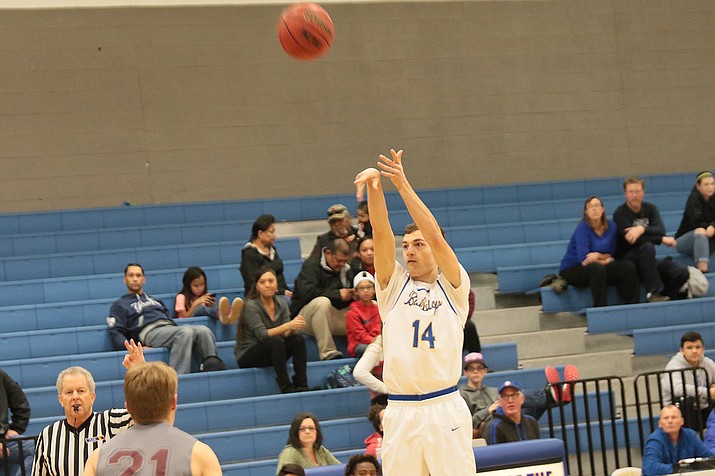 Jordan Dupee puts up a jumper for the Kingman Bulldogs against Odyssey Institute earlier this season.

KINGMAN – Of all the games this weekend, the most compelling in the region, guys or girls, is Kingman Academy girls. Why? Either your team has locked up a berth in the playoffs or has been eliminated.

Kingman Academy girls have to go on the road and win against Parker. The last time they faced Parker at home they defeated the Broncs, 45-37. In that game the Lady Tigers received timely scoring from senior Amberlee Steed with 13 points and junior Chloe Elliot added 12 points. There were several minutes when Kingman Academy turned the ball over and could not score. If this happens tonight the chances of them winning and having a play-in game will be slim.

Look for first-year coach Garth Steed to get votes as the 2A West Region Coach of the Year. Last year, with virtually the same girls, Kingman Academy won one game. This year they are in second place with a 6-11 record overall, and a 6-3 record in the West Region.

First-year coach Tony Kern had a difficult job coming into this season. He has done an admirable job implanting a different system that has taken his team a majority of the season to learn. While the result may not be there this year, in the next couple of years they will show up. Kern’s style of trapping and pressing wears teams down.

Against Wickenburg, a team that had beaten Kingman on their home floor less than a week ago, 60-45, on Tuesday night lost 38-37. The Lady Bulldogs were a turnover and jump shot away from knocking off a team with superior height advantage.

With two games left, the positive outlook is Kingman has a chance to finish .500 in conference. After the loss of several key contributors from last year’s state team, to be in this position is not only a testament to the coaching job Kern has done, but to the girls playing for their pride, school and themselves.

Lee Williams coach Jerry Arave has to continue to believe in his team this year. He has the Vols playing .500 basketball overall. With a 51-30 loss on Wednesday night to Bradshaw Mountain 51-30, their main thing is to improve their seeding for the tournament. Arave hopes their offense starts clicking when the region tournament begins.

The Lady Vols have played five games in a span of eight days and could be tired.

Kingman Academy is the class of the 2A West Region this season, with a shot to go undefeated in region play (12-6, 9-0 2A West Region). The team was at one point 3-6 and waiting for senior guard David Larrabee to become eligible. Once he did, the Tigers have not been beaten, forming one of the best inside-outside tandems in the region. Larrabee’s play, along with senior Cade Martin, and Chinyere Tyler have formed a big three that has been hard to stop on both ends of the floor.

The only things that could derail the Tigers is overconfidence, injury, and thinking every game is going to be easy. If this team is going to advance in the playoffs look for several unsung heroes to step up and have big games on both ends of the floor.

Look for Larrabee and Martin to be co-players of the year in the region, and Tigers coach Brian Devincenzi to be region coach of the year.

Kingman has an outside chance to make it to the playoffs, but they need to win out for starters. And more help from other teams than can be figured out in this article.

They nice part is the four seniors have a chance to hit the double-digit win column, something not been done since 2013. The best coach Nick Juby can hope for is to win out and build momentum for next season.

Its been a tough season for first-year boys’ coach Cain Atkinson. His team has played hard for him and unfortunately has ended up on the wrong side of the win column too many times. They cannot finish with a winning season unless they make some noise in the region tournament. Coach Atkinson thinks if his team plays the way it is capable of playing it has a shot to beat anybody. Expect a lower seeding for them.