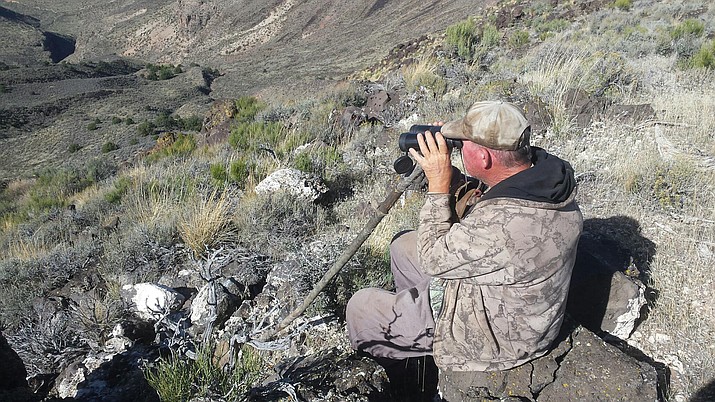 Outdoors Writer Don Martin is shown glassing into the Paiute Wilderness area near Ram Canyon on a recent scouting trip on the Arizona Strip.

On his final day in office, Dan Ashe, who was appointed by former President Barack Obama to be the director of the U.S. Fish and Wildlife Service, took one last shot at sportsmen in America.

He sent out what was called Director Order number 219 that states, “Will require the use of nontoxic ammunition and fishing tackle to the fullest extent practicable for all activities on Service lands, waters and facilities by January 2022, except as needed for law enforcement or health and safety uses, as provided by in this policy.”

This move is viewed by many sportsmen and organizations as a smack to the face of the nation’s hunters and anglers.

Scott Gudes is vice president of Government Affairs for the American Sportfishing Association. He said, “The sport fishing industry views this unilateral policy to ban lead fishing tackle, which was developed without any input from the industry, other angling organizations and state fish and wildlife agencies, as a complete disregard for the economic and social impact it will have on anglers and the recreational fishing industry.”

Gudes continued: “A sound, science-driven and durable policy could have been crafted with input from industry and the broader recreational fishing community. We are hopeful that new leadership at the U.S. Fish and Wildlife Service will repeal this Director’s Order and develop public policy in a way that is open, inclusive and based on science.”

But it is not just the fishing industry that is fired up about this last minute slap at the nation’s multimillion-dollar fishing and hunting industry.

The National Shooting Sports Foundation, a trade organization for the firearms industry with the mission to promote, protect and preserve hunting and the shooting sports has also decried the action taken by Ashe.

“This directive is irresponsible and driven not out of sound science but unchecked politics,” said Lawrence Keane, NSSF senior vice-president and general counsel. “The timing is suspect, and the next director should immediately rescind this, and instead create policy based upon scientific evidence of population impacts with regard to the use of traditional ammunition.”

Safari Club International is another organization that is upset with not only the timing of the order, but also its intent.

In a posting on their blog, “First For Hunters,” it states: “Sportsmen and women need to recognize the threats on our hunting heritage and fight the attacks against the scientific management under the North American Model of Wildlife Conservation.”

The message further states, “There is no adverse wildlife population impacts or public health concerns on FWS lands that require such an unwarranted, national intervention as this director’s order seeks. It is simply an attempt to drive hunters, and subsequently recreational target shooters, off of federal public lands. It is unnecessary and has no basis in sound science.”

For local sportsmen, this means that lead ammunition that is traditionally used for doves and upland game birds, including quail, on lands controlled by the FWS, would be banned.

Many believe the new director of the service, whoever it is, under the Trump administration will revisit and ultimately rescind this directive.

Public policy should be made with the use of good science and not just as a political statement by an outgoing disgruntled federal agency administrator.

Good science should be the driver to make these broad sweeping public policy decisions, taking into consideration the impacts to both the wildlife and the people.

To do otherwise simply isn’t wise or warranted.