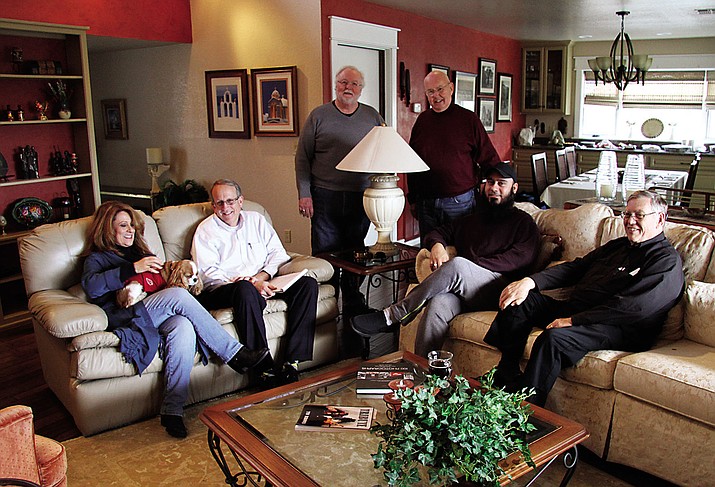 From left to right at a home in Kingman to discuss future plans Tuesday are Rabbi Mindie Snyder of the Congregation of Lev Shalom from Flagstaff, Vance Miller of the Church of Jesus Christ of Latter Day Saints, Father Philip Shaw of Trinity Episcopal, Ray Christenson, Imam Umar of Masjid Ibrahim and Father Leonard Walker of Divine Savior Catholic.

KINGMAN – The multi-faith community is banding together once again in the face of adversity.

The Kingman Unified Pastoral Association plans to hold its first Ecumenical Forum of 2017 – and third in two years – at 5:30 p.m., Feb. 26 at the Latter-day Saints church, 610 Eastern Ave., which is open to the public.

The forum will run until 7 p.m., followed by a multicultural potluck similar to the interfaith meeting at Grace Lutheran Church last August.

The theme for this forum is “The Christian Concept of Original Sin or the Age of Responsibility.”

“Christians are the only religion that uses the concept of original sin,” said retired Grace Lutheran Church Pastor Ray Christenson.

Members of other faiths will discuss their views on what they refer to as the Age of Responsibility.

“It’s a term that can’t really be defined,” said Christenson. “Some faiths interpret it tightly and some loosely.”

He’s referring to what some religions consider the age when a child begins his or her journey into adulthood and starts becoming accountable for their own actions.

The event will have two parts, starting with Father Walker’s opening commentary and description of original sin. The panel of religious leaders will add to the discussion followed by a question and answer session with the audience.

“We want to educate before allowing questions,” Christenson said. “So we get intelligent questions based on fact instead of hearsay.”

The second half is devoted to obedience to God in an age of conflict and persecution.

“Again, this is not to argue, but to clarify,” Christenson said.

The travel ban on immigrants and refugees from seven Muslim countries is the most significant recent event spurring this discussion. According to the local Muslim community, it won’t affect them as it has Muslims in other parts of the country, but that didn’t stop the pastoral association from bringing it up.

Christenson said he was approached by activists wanting to show their support for Kingman Muslims shortly after President Donald Trump’s executive order was signed. After talking to Mahmood, both parties decided that rather than organize a public demonstration of unity, Christenson suggested supporters write letters of support instead. “This is a sign that the interfaith community wants to seek justice and support in the fight against oppression,” Christenson said.